While everyone knows about the neighborhood focused brewpubs and restaurants of Portland, you less often hear about the role markets play as a local gathering place. Such is the case with the family that’s opening West Coast Grocery Company – a brewery that’s reviving the name of the one time thriving NW grocery wholesaler.

Founder/Owner Charlie Hyde’s great-great-grandfather founded the West Coast Grocery Company in Tacoma, Washington back in 1891, which was eventually purchased by another wholesaler, Supervalu, back in 1985.

Bringing the name back to life seems a better choice than the brewery’s original moniker, Bodega Beer (now kept alive by their IPA collaboration with Breakside, Bo-De-Ga IPA). And the entire space has a casual vibe that simultaneously fuses NW timber and industrial steel, with grocery store touches.

Their main bar, found atop a flight of stairs, is reminiscent of a deli counter and the playful decor features hanging shopping carts, mural art on the wall, and shuffleboard.

Astride the bar you’ll find a cozy pillowed corner and merch available for purchase. Behind the large freight elevator in the corner, you’ll find another long set of stairs, taking you back down two flights to the brewfloor. The brewdeck itself is effectively back at ground level, with the surrounding tanks rising from the floor below. 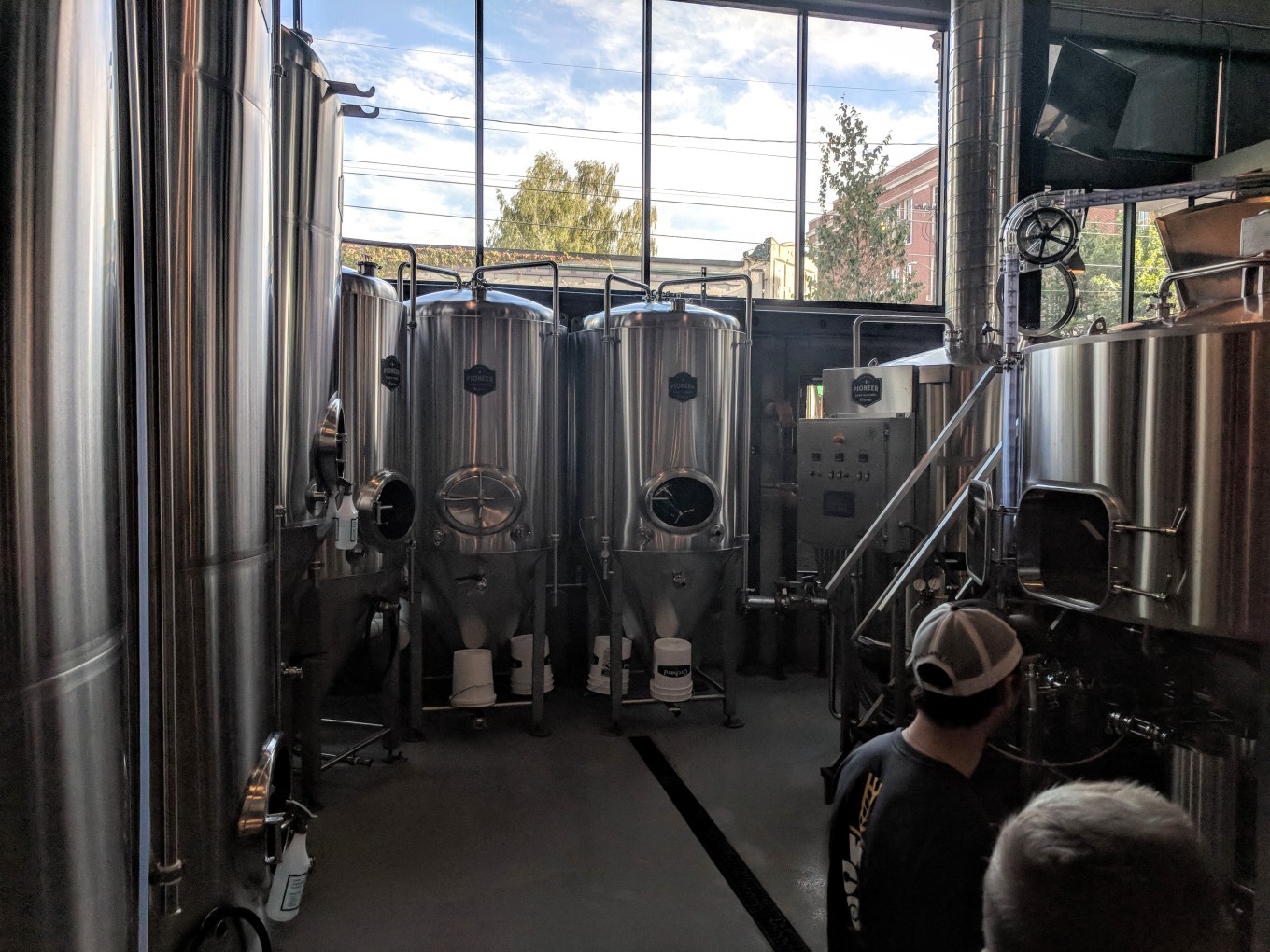 There are additional nooks and crannies throughout the building, including what will be a space for barrel-aging and bottling, a half-floor below the brewhouse. Their 15 barrel system is just getting warmed up with a test batch of Pale (brewed with Ella, Simcoe & Tettnang hops) bubbling in the fermenter.

The diverse food menu includes snacks, salads, wings, sandwiches, plus a number of vegan options as well. We had a wide sampling of most everything and 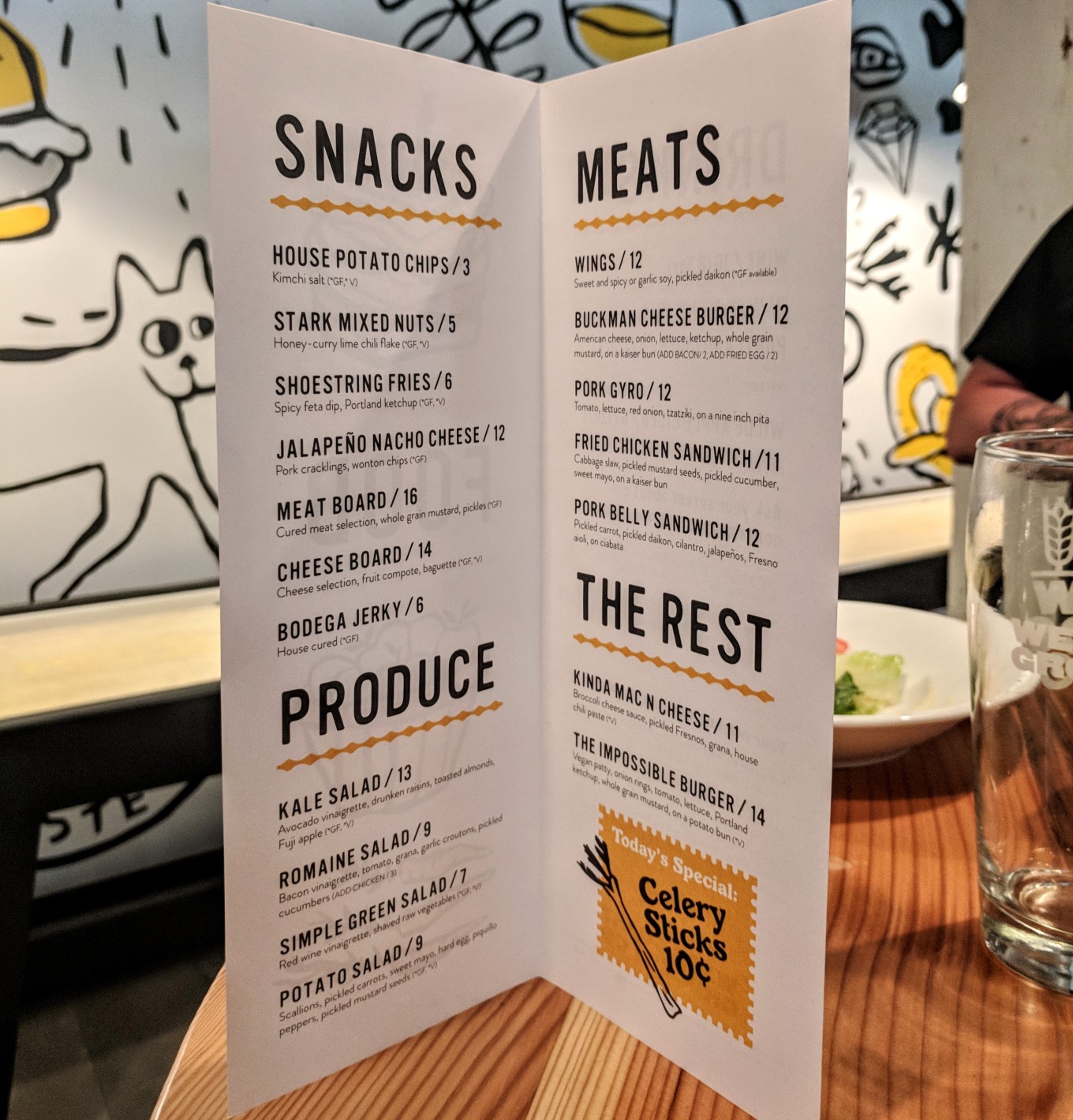 Located at SE 14th and Stark, across from the Beer taproom and kitty-corner to Revolution Hall, WCGC is tucked into one of the Buckman Neighborhood’s last under-served corners (something I recently reported on here as well).

They effectively had their “soft opening” Tuesday night, but will hold their Grand Opening on Friday from 11:30am to 11:00pm, with giveaways taking place at 5pm. Be sure to stop by and check it out when you can, for it’s one of the most unique spaces in town.

And it’s all enough to remember how the neighborhood store used to be – a social place to gather among friends. 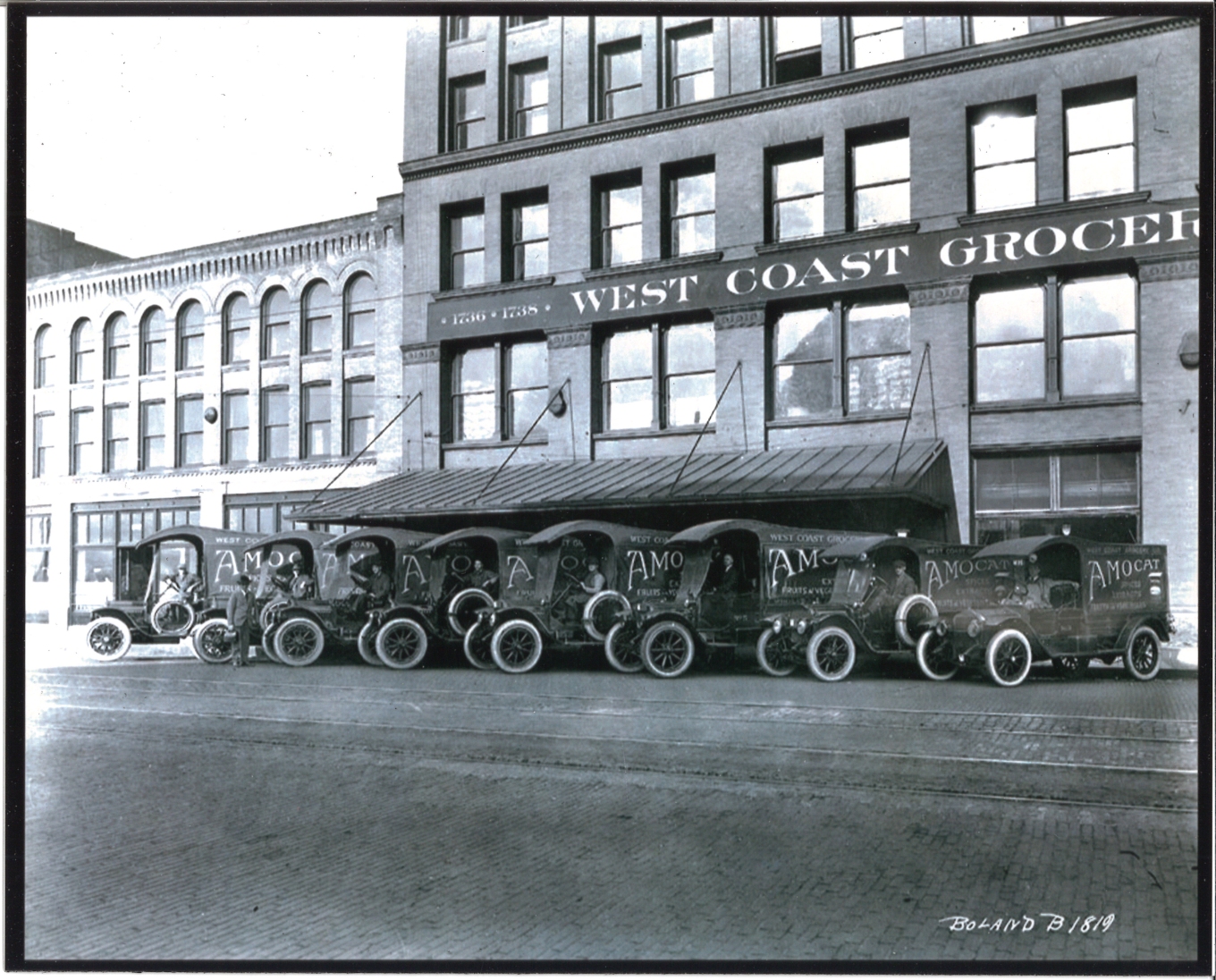 The heart of any neighborhood has always been the corner grocery. It’s a place where people lingered while they shopped, chatting with their friends and catching up on the latest gossip. In a less hurried time, the corner grocery was our social network. We knew the names of the people behind the counter and they knew ours. They also knew our tastes and carried exactly what we wanted.

Our family has been in the wholesale grocery business in the Northwest since 1891. For five generations they have supplied grocery stores with foods, herbs, spices, and staples—the things that make life both possible and pleasurable.

That’s why our brewery is called West Coast Grocery Co. Not just because we’re the fifth generation to do business under that name, but because we believe in the corner brewery—the place where the neighborhood goes. The place where really good food and beer are served the way locals like it.

We have 12 beers on tap and a kitchen serving everything from sandwiches to meals. So munch on some celery, drink a pint, and tell us what’s up.

Hello Again...
Really enjoying @hopworksbeer's rejuvenated Pig War... for what was once a White IPA is now a Hazy IPA.
Celebrating National Beer Day with something from the other side of the nation, @mainebeerco's Woods & Waters India Pale Ale.
Cheers to finishing a long week of moving, to sunny days returning to Portland, and to delicious liters of Helles on a Friday.
Got these custom kicks from @vans via their #footthebill campaign with @crownsandhops!
Feeling like a summer evening here at @lombardhousebeer, which includes some cleverly appropriate glassware...
Soaking in the warm sun with a Cold IPA.
This lovely new bird from @structuresbrewing is landing in Oregon starting tomorrow.
Thankful for @buck_wolf_ reminding me that there's a Dark Lager I missed!
365 Days Later: Resilience
Craft Beer Scribe West Coast Grocery Co. Now Open
Loading Comments...
Comment
×
%d bloggers like this: