Have you noticed that Portland breweries are breeding like rabbits lately?

And I’m not talking about new breweries really. These are mostly existing breweries, setting up shop in another location.

Now you might be thinking “doesn’t Portland already have like 80 breweries already?!” Yes, but we’re generally not talking about your traditional mass-production operations. Most aren’t canning and kegging everything in sight so as to distribute outside of the region.

They’re feeding off the high demand and under-served neighborhoods that currently exist – mostly the outer pockets of Portland proper and into the suburban reaches.

And it makes sense because today’s growth in craft beer is happening predominantly in the retail sector – taprooms, local keg distro to restaurants/bars/taprooms, and small batches of can releases for self-distribution.

So with that in mind, here are 12 new locations that have recently opened, are opening very soon, or are in the planning stages, with most being second taprooms or slightly larger production facilities.

Why You Should Check It Out: St. John’s, aside from the stalwart McMenamin’s location, has had very little going on brewpub-wise. Having this beautifully remodeled, cozy spot with all the great beer and food that Stormbreaker has become known for, is a no-brainer destination in North Portland.

Why You Should Check It Out: The second location for Little Beast occupies the former Lompoc Brewing Hedge House. It’s an ideal, pastoral setting for the delicious offerings provided by owners Charles Porter and Brenda Crow – each a co-founder and partner in the operation. Enjoy a lazy afternoon on their shady lawn that fronts the property, their beer garden space, or cozy interior. More details can be found in the article I wrote this May and there’s more about their future production facility below.

Why You Should Check It Out: As locals in the area know, there’s a minimal craft beer presence in the area, but they’ve hit the jackpot with former HUB brew Trever Bass at the helm and a delicious menu featuring pizza & calzones, salads and sandwiches. Now that they’re working with a distributor and on a larger system, the focus of the facility is certainly production, but the dining space is very cool featuring murals, darts and more.

Why You Should Check It Out: I’m especially biased because I live a short 10 minute walk away, so I’m stoked! The variety of carts on hand (from Korean/Hawaiian to Ramen and Burgers) to the great variety on tap, there’s a little of everything here. Can’t beat the chill neighborhood vibe as well and of course the beer is excellent. Let me know if you’re heading down and I’ll do my best to join you!

Why You Should Check It Out: Sure, most of these breweries are going “inside-out,” yet others are expanding from the outside-in. Situated next to the Oregon Rail Heritage Center, this unique location has a dining room that resides within a railcar. It’s a perfect stop for bike and rail commuters, as well as those visiting OMSI or the Portland Opera. Their Italian and Spanish fare is counter-balanced by Mt Hood’s classic beer styles, a brewery in operation, on the mountain itself, since 1991. 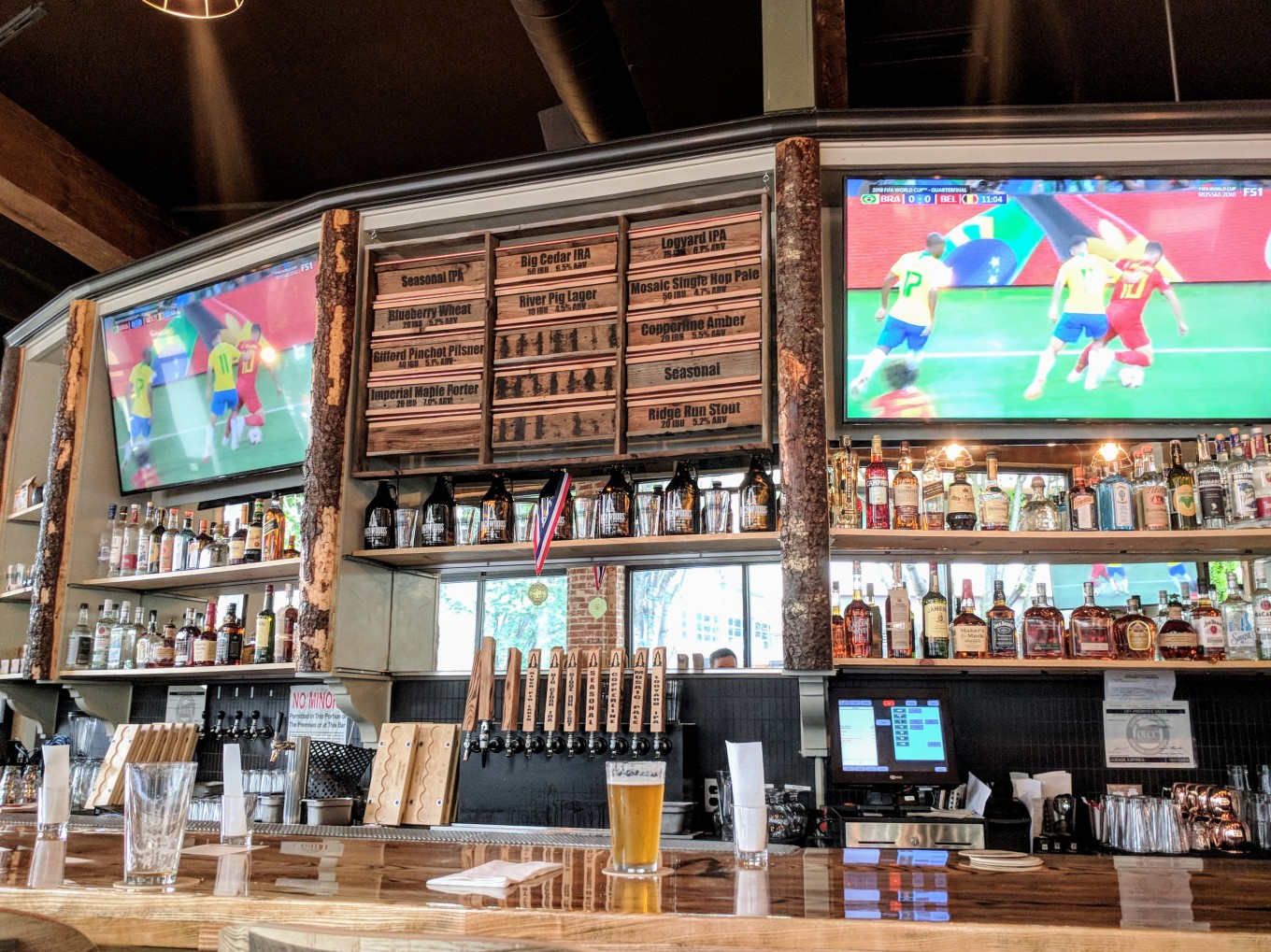 Backwoods Brewing in the Pearl

Why You Should Check It Out: I know what you’re thinking – this is located downtown and it’s a Washington brewery. True. Though it’s yet another brewery that felt a niche brewery like Backwoods could thrive with another retail location (their original spot is in Carson, and they have a production facility in Stevenson). They’re planning to feature some “Pearl only” taps, plus their menu offers a variety of sandwiches, burgers, salads and appetizers. Really enjoyed the contrasting woodsy decor in middle of the city.

Why You Should Check It Out: Ruse’s opening is quite possibly the most eagerly anticipated of the year, yet little is known about the new space for the former Culmination brewers Devin Benware and Shaun Kalis. It’s located in the Iron Fireman Collective building, one block away from an Orange MAX line station, is estimated to be 6,000 sq ft. in size, and will feature a 10 bbl brewing system, with some 20 bbl fermenters. I have a suspicion that the interior will be as intriguing and multifaceted as their complex sours and ales.

Why You Should Check It Out: Well, if you’re a golfer, it’s ideally located on the 10th hole of the Glendoveer Golf Course. Beer will be initially brought in from their other new location in the Pearl, but eventually brewed on-site with a 7 bbl system and 3.5 vessels. Even more exciting is their plan to house “multiple foeders, wine puncheons, barrels, fruiting tanks as well as a coolship” on premise. Considering those implements, it should be no surprise that Sean Burke, formerly of The Commons Brewing, will head up brewing here.

Upcoming Events: While the Grand Opening is officially on Monday, there’s scheduled to be a Brunch Kickoff on Saturday.

Why You Should Check It Out: Reverend Nat’s recently expanded their distribution to New York and show no signs of slowing down, especially once they get this new, much bigger production facility up and running. The uncertainty surrounding when it will open is due to the permitting process of the city. Located across the tracks from Widmer Brothers, there are no plans for a taproom on site as they will continue to maintain their original location, just 5 minutes away in NE Portland.

Why You Should Check It Out: This 5,750 sq ft former production space for Drinking Horse Brewing will soon replace Little Beast’s current brewing operation in Beaverton. I’ve spoken with co-owner Charles about progress and he seemed optimistic in having their new brewing system in place before the end of the year. There are no plans, as of yet, to open a taproom, but potentially once all the dust has settled.

Why You Should Check It Out: The nation’s first non-profit brewery is not only heading West to Beaverton, they’re also working on a Production facility in Albquerque, New Mexico. If the artists renditions of the space turn out to be as beautiful in reality, this historic building should be a perfect location for Ex Novo’s ethos. Not to mention having a legit taproom, that’s offers their delicious Detroit-style pizza being a welcome addition to the Beaverton scene, which has few options in the realm of brewpubs.

All photos by Warren Wills unless otherwise noted.

Really enjoying @hopworksbeer's rejuvenated Pig War... for what was once a White IPA is now a Hazy IPA.
Celebrating National Beer Day with something from the other side of the nation, @mainebeerco's Woods & Waters India Pale Ale.
Cheers to finishing a long week of moving, to sunny days returning to Portland, and to delicious liters of Helles on a Friday.
Got these custom kicks from @vans via their #footthebill campaign with @crownsandhops!
Feeling like a summer evening here at @lombardhousebeer, which includes some cleverly appropriate glassware...
Soaking in the warm sun with a Cold IPA.
This lovely new bird from @structuresbrewing is landing in Oregon starting tomorrow.
Thankful for @buck_wolf_ reminding me that there's a Dark Lager I missed!
365 Days Later: Resilience
Lager Is Super Awesome. And this Hoppy Export Lager from @heaterallenbeer is exactly that. Featuring Tettnanger & Hallertau Blanc hops added hot side, it's imbued with more of a floral & earthy essence than hop bitterness. Superb 🍻
Craft Beer Scribe Portland Breweries Head to the Neighborhoods
Loading Comments...
Comment
×
%d bloggers like this: