Over the course of 8 years, Brews for New Avenues (BFNA) – a fundraiser created to benefit the mission of New Avenues for Youth, has effectively become the world’s largest rare beer auction. This annual series of beer focused events includes an Oysters & Gueuze social, Brewers Dinner, and the Main Event at the Left Bank Annex, featuring a VIP session, plus silent and live auctions. All told, the program has raised over $750,000 in support of preventing and ending youth homelessness in Portland, Oregon.

This year’s event highlights yet another way to donate in the newly created Cap & Cork Crew. BFNA’s goal is to enlist 100 new members, with each donating a minimum of one case of rare, vintage, or limited edition beers between now and August 1st, although cases can be donated year-round. They will be auctioned off or be added to the “Wall of Beer,” featured during the sessions on August 10th. Benefits of Cap & Cork include the following:

To sign-up for the Cap & Cork Crew, or make a donation of any kind including kegs, live and silent auction items, click here.

Although the special events (Oysters & Gueuze, Brewers Dinner, and VIP Session) running from August 8th-10th have already sold out, General Admission tickets for the August 10th Main Event are still available, but going fast! You can still purchase them here.

While much is made about the highly coveted VIP session, which begins the day, many of the taps from the VIP session will still be flowing during the Main Event. Those rotating taps will feature special beers from over 50 of the best breweries in the world. The VIP session will feature guest brewer pours from Logsdon Farmhouse Ales, a collaboration beer from Tioga-Sequoia and Altbrau, plus Nat from Reverend Nat’s Hard Cider serving some of the best cider in Portland (VIP and Main Event).

As always there will be a great variety of top-shelf mystery beers to chose from off the Wall of Beer and Wall of Lambic (VIP). The latter of the two is sponsored by Lambic.info, who’s again holding their Lambic Against Youth Homelessness Raffle. Last year’s raffle raised over 30,000, donated by over 5,000 members from 11 countries.

This year’s International Guest is Raf Souvereyns of Bokke, one of Belgium’s most acclaimed young Lambic brewers. He’ll be in the house, along with more of his large format bottles than ever before up for auction, as well special pours during the VIP session.

When it comes to food, there will be a wide variety of delicious charcuterie from Olympia Provisions and only the tastiest pairings from Cheese Bar during the VIP session. During the Main Event, there will be food carts available and live music flowing in the parking lot.

Last, but not least, there will be 9 to 10 different special items up for bid during the Live Auction. Thus far only 5 have been revealed and they’re as follows:

While this all sounds like a full slate for the event, there’s always a number of surprises, including additional collaboration beers, unexpected breweries in attendance, and more silent auction packages than can be listed here.

Each year that I’ve attended Brews for New Avenues, it’s always outdone the previous year, and this year’s event is primed to continue the trend. I look forward to seeing you there!

Tickets to the Main Event 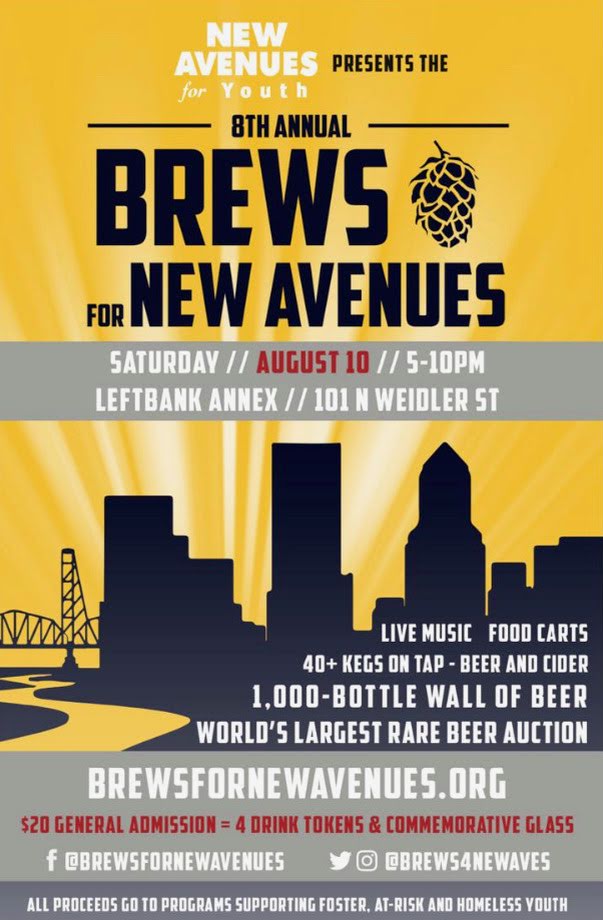 A taste of last night's palate adventures:
When the light's just right on a beautiful day at @rusebrewing...
As @bridgetownbeer prepares to celebrate their 14th Anniversary tomorrow, @drinkviabeer kicked off the celebration last night with a tap takeover, including their new collab with Bridgetown, Godzuki Rice Lager.
Over the weekend I paid a visit to The House of Lords... well, I sat down for a chat at the home of Giselle & Gavin Lord of @hettyalicebeer, and met their infant son Gibran as well!
A spectacular 4th Anniversary celebration was had yesterday at @wildwoodtap in Hillsboro, including a special visit from the owners of @burnsalesdenver and featuring some savory delectations:
A great night at @arraybottleshop celebrating @a.message.from.our.sponsor's birthday 🍻
The following retrospective was inspired by posts from @lowestculture & @mymoneygoestobeer in December.
Spent last night celebrating the release of a new IPA from @vicebeer & @la_mere_brewing called Suitcase Full of Cash.
When one of your favorite local breweries does a tap-takeover at one of this town's most under-the-radar bottle shop/taprooms, you have to go!
Five Years On
Craft Beer Scribe 8th Annual Brews for New Avenues Features New Cap & Cork Crew
Loading Comments...
%d bloggers like this: