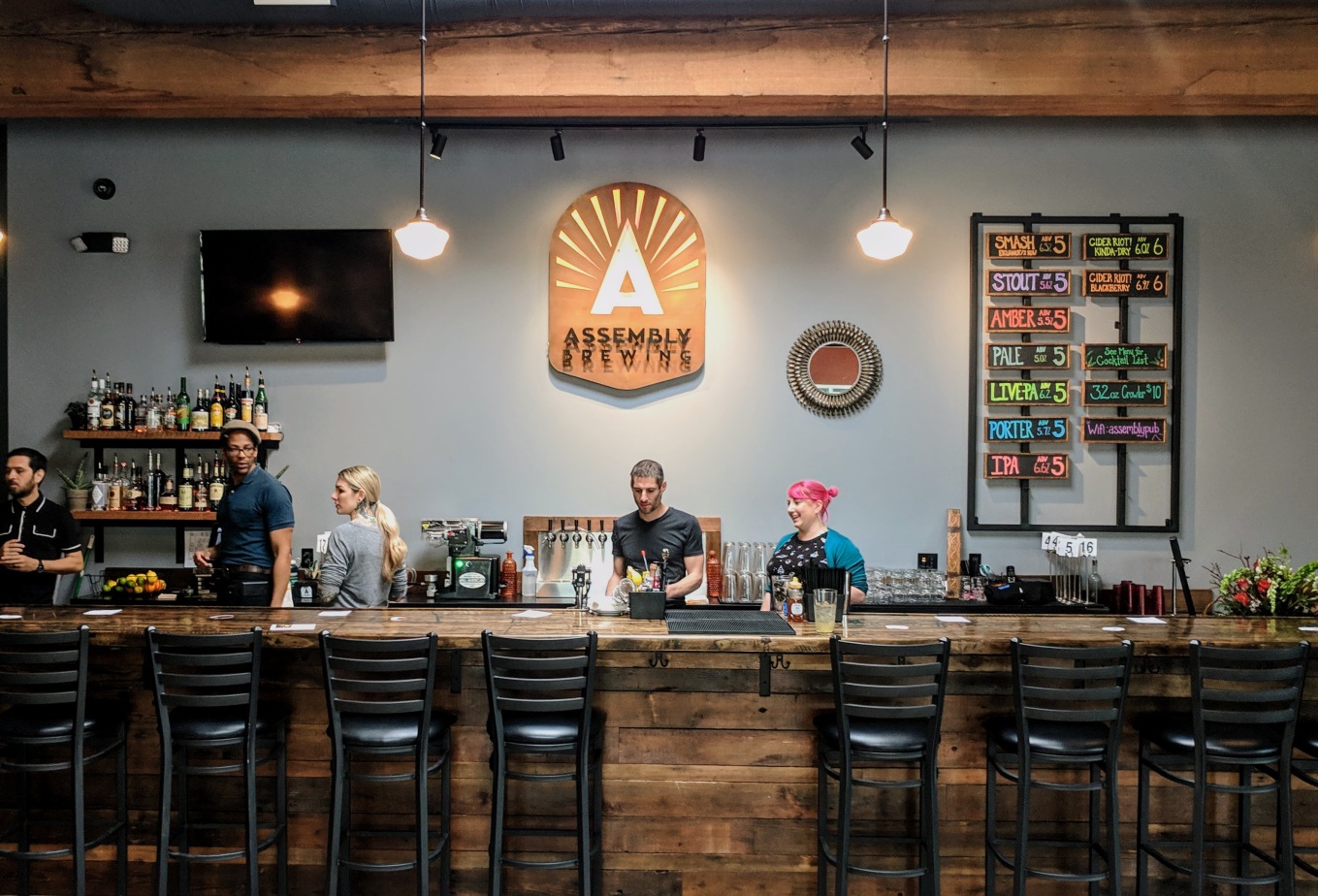 The craft beer industry, over the past decade, has seen a myriad of changes, all at a mind-numbing pace. We’ve seen shifts in state regulations resulting in the explosive growth of new draft focused breweries, all those mergers and acquisitions, technological innovations, a fair share of closures, and most obvious to the consumer, a continuing evolution of beer styles.

Having read the article posted by Jeff Alworth last week (a very interesting read), I’m now intrigued by the idea of traditional styles and brewing innovation being cyclical in nature. That the new trends of a given era will often spur a return by brewers to traditional styles of the past and vice versa.

This notion seems to be the propellant by which Portland’s newest brewery is being powered. Assembly Brewing, featuring straight ahead beer styles (minus the clever names) and authentic Detroit-style pizza, has created a unique enclave that hearkens back to a time when craft beer, and the pub model as a whole, were simpler.

They’ll be celebrating their Grand Opening this Friday (details below), though their “soft opening” this past weekend saw them already inundated with curious quaffers. 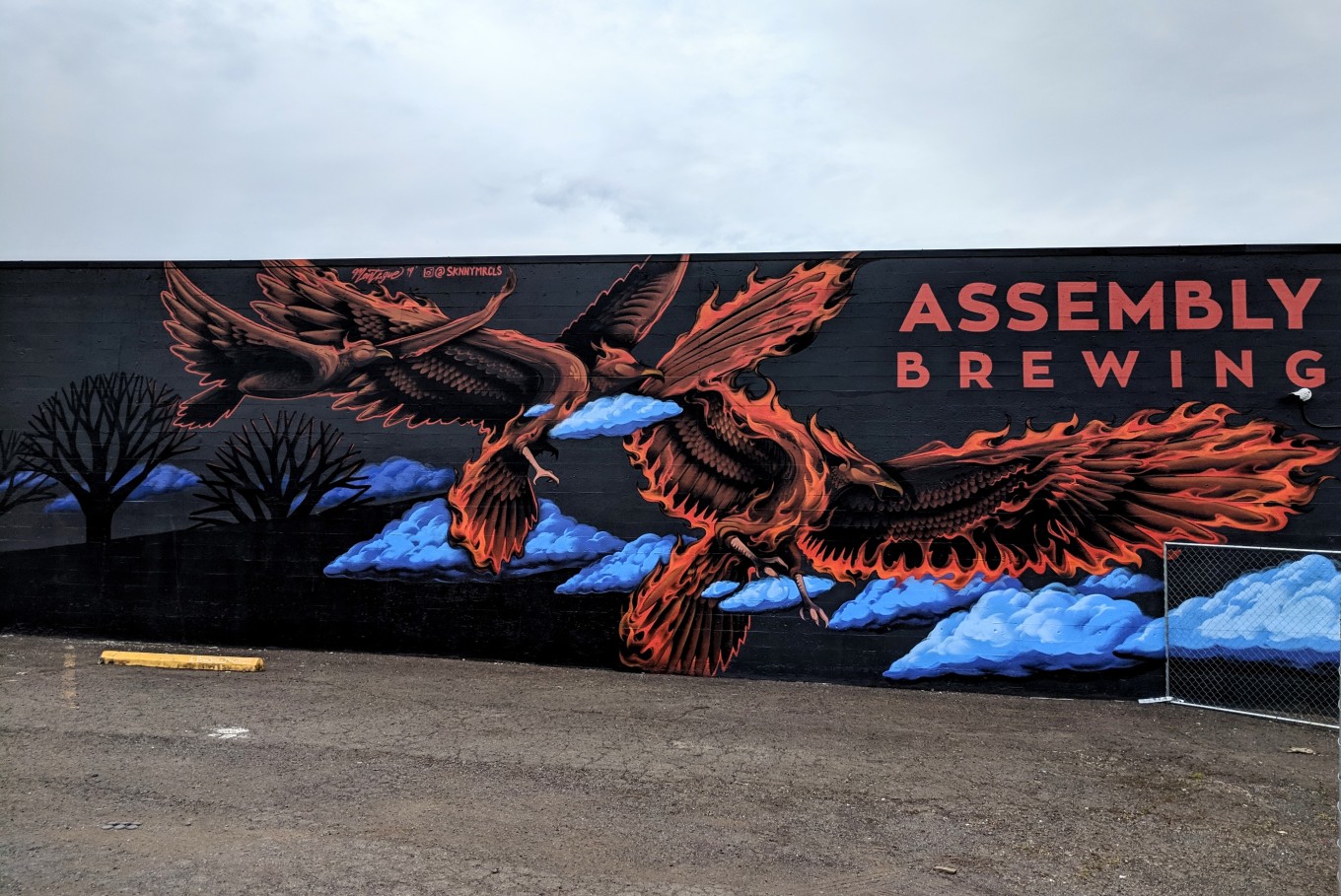 Assembly’s location on the corner of SE 61st and Foster, found smack dab on the hypotenuse of the Foster-Powell neighborhood’s triangular boundary, provides an oasis to a relatively spare neighborhood for brewpubs.

Co-Founders George Johnson and Adam Dixon have each resided in the neighborhood for over a decade, so it only makes sense that the locations ethos would invoke an industrial vibe that not only reflects the neighborhood in which it resides, but also that of Johnson’s Detroit roots.

And it’s this formula – from their brewery specific spin on Diego Rivera’s Detroit Industry Murals, to Johnson’s pizza featuring proprietary dough yeast, that make this location a one-of-a-kind destination. They’re all about enticing the general public, not simply catering to trend-seeking beer nerds.

Having spent two hours last week previewing the space, along with Portland’s cadre of local beer writers, it became clear to me that Dixon and Johnson, who’s also the Head Brewer, are looking to attract those who might feel like the evolution of craft styles left their interests behind.

All the equipment in their 15 barrel brew house is labeled with the name of each vessel and the seven beers on draft (at ABVs between 5% and 6.6%) are all reminiscent of America’s craft beer styles in the early 90’s. It’s these small details that appear to reveal a broader purpose: to provide an educational environment for all their patrons.

Taking the deliberate step of making their beers “flavorful, balanced, and approachable,” says Johnson, they’ve carved out a niche that makes them unlike any other brewpub in town. I mean, think about it… when was the last time you walked into a Portland brewery and found a tap list that primarily names the beer styles and doesn’t have a DIPA, kettle sour, Imperial Stout, or Hazy IPA on draft? This is an aberration!

And this is more than just a brewery taproom. In addition to the seven pre-built pizza styles and endless topping combinations (including vegetarian and vegan options), they also feature a full bar and cocktail menu, covered patio seating, a trio of pinball machines, as well as a small stage for live music.

If there’s anything that concerns me about Assembly’s set-up, it’s the exclusion that comes with making it a 21+ only location. While I don’t have kids and honestly prefer an “adults only” environment, this policy seems to run contrary to what I presume to be a neighborhood dense with families yearning for pizza.

There are also a number of taprooms and bars in the area (including Bar Maven across the street and N.W.I.P.A three blocks away) which syncs with the location staying open until 2am, though I’ll be curious to see if that continues as well.

As for the beer available on draft, it provides something for everyone. Each is a reminder that not every new brewery in this town has to run with the latest trends to put themselves on the map. While Johnson hasn’t worked as a professional brewer before this new venture, he’s been home brewing for years and done some apprentice work at nearby breweries Gigantic and Hopworks.

Of everything I tried, most impressive were the styles I loved back when first dipping my toes in craft beer waters around 1995 – the Amber, Stout, Porter, and Pale are all noteworthy. They do meet the owners’ goal of making approachable styles and while there is still work to be done in dialing in a few of their beers, it’s a great start and a refreshing change of pace.

It’s this need to produce something different – beers devoid of hype, bombastic hop additions, or adjuncts like fruit or coffee that make this endeavor a much needed reminder of how the modern craft beer movement took off.

Today, Portland’s hottest breweries are often reveling in the latest trends that have defined craft beer over the past six years or are laser-focused on specific Germanic or Belgian styles. Those who drink these beers (including myself), on the regular, are accustomed to always having those options and are understandably beholden to them.

Yet with the opening of Assembly Brewing, a new kind of disruption is taking place, one guided by the idea of appealing to all, not just the few. I’m certain younger beer aficionados would do themselves a favor by learning more about what craft beer was all about during the brewery boom of the mid-90’s.

Many weren’t even born yet or of drinking age when the Bust of 1997 forever changed American brewing into what it’s become today.

And we could all use a little more perspective from time to time.

11 AM – Opening ceremony led by Johnson and Dixon. Also expected to attend are members of the The Foster Area Business Association (FABA), a group of business owners and representatives from Foster Road between Powell Blvd. and 82nd Ave. in Portland, Oregon.

11 AM – 2 AM – Assembly Brewing officially opens, welcoming patrons 21 and older. Johnson’s balanced American craft ales and his signature Detroit-style pizza, along with salads, appetizers, and sandwiches, will be served throughout the day and night until closing at 2 AM.

The tap list will include seven beers at opening (two pale ales, two IPAs, an amber, stout and porter) with more to come. Local Cider Riot cider on tap, wines, and a selection of hand made cocktails and spirits are also available.

NOTE: In celebration of the grand opening, all customers will receive a coupon for $5 off a future visit, good towards the purchase of large pizza.

5-7 PM – Several local artists provided special touches to the interior and exterior of the space, and many of them will be available to answer questions about their work. The artists include:

Please join us as we celebrate the realization and completion of a Herculean task of bringing craft beer to the Foster area and the surrounding neighborhoods.

A taste of last night's palate adventures:
When the light's just right on a beautiful day at @rusebrewing...
As @bridgetownbeer prepares to celebrate their 14th Anniversary tomorrow, @drinkviabeer kicked off the celebration last night with a tap takeover, including their new collab with Bridgetown, Godzuki Rice Lager.
Over the weekend I paid a visit to The House of Lords... well, I sat down for a chat at the home of Giselle & Gavin Lord of @hettyalicebeer, and met their infant son Gibran as well!
A spectacular 4th Anniversary celebration was had yesterday at @wildwoodtap in Hillsboro, including a special visit from the owners of @burnsalesdenver and featuring some savory delectations:
A great night at @arraybottleshop celebrating @a.message.from.our.sponsor's birthday 🍻
The following retrospective was inspired by posts from @lowestculture & @mymoneygoestobeer in December.
Spent last night celebrating the release of a new IPA from @vicebeer & @la_mere_brewing called Suitcase Full of Cash.
When one of your favorite local breweries does a tap-takeover at one of this town's most under-the-radar bottle shop/taprooms, you have to go!
Five Years On
Craft Beer Scribe Assembly Brewing Sets Course for the Future by Channeling the Past
Loading Comments...
%d bloggers like this: