After less than a full month of preparation, the crew at Modern Times is today celebrating the opening of their new Portland location, The Belmont Fermentorium.

For all the details on the new operation, check out my earlier post, though much has changed in the two weeks since I last visited. The 20′ tall homage to Macho Man Randy Savage was nearly complete when visiting on Friday – just missing his hands and a few details here and there.

Also appearing to be complete is the cool yarn strung hallway between the taproom and the brewery. It’s filled with interactive dioramas such as the California Raisins in an old radio, a Donkey Kong display, the Teenage Mutant Ninja Turtles and more. You can find a video of most of the hallway at the end of this article.

Taproom seating is partially made up of vintage couches, tables, chairs, and lamps. The bar itself is decorated with multicolored 3.5″ floppy disks, and a marble bar top, all under the gaze of that sparkling wrestler piñata overhead. The space is also highlighted by beautiful tile-work behind the taps. 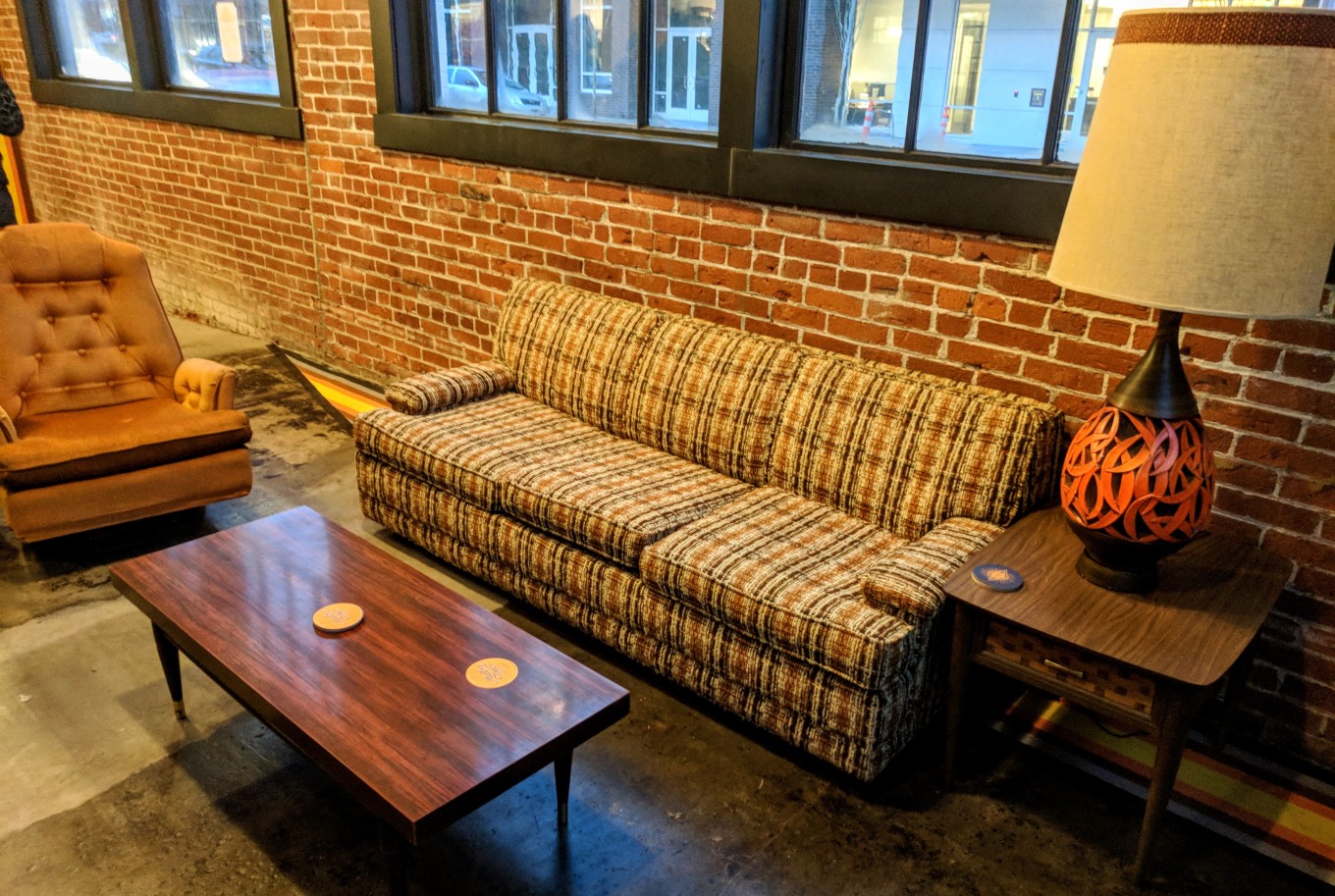 The edges of the entire space are colorfully lined with a 5 color edging that matches the disks on the bar. Also of note are the plywood facades atop the main structure, originally installed by The Commons, which are still unfinished, though this should change during Phase 2 renovations, if not sooner.

Another big change is the removal of the pilot brew system out front, now replaced with a small gift shop filled with shirts, hats and other merchandise, plus two coolers filled with cans of beer as well as cold brew.

The taplist itself was populated by stalwart beers brewed in San Diego such as Lomaland, Black House and Fruitlands (11 taps in total). They also had on Fortunate Sun – their recent collaboration with Great Notion, a secret tap, and the first PDX brewed batch of Orderville IPA. They’ll eventually have 25 taps flowing, including 2 nitro taps. For today’s opening, they’re hoping to tap a few more beers brewed on the PDX system as well.

Last but not least, there was a somewhat limited Vegan food menu featuring a few sandwiches, tacos, and sides. I’m certain this too will grow in size, especially once the 2nd Phase is completed, which will see a larger kitchen built next door.

Be sure to check out their new space today starting at 11am and open until 10pm.

An extra continental evening last night...
Once again floored by another stellar Lager from the house of @lowercasebeer.
Tomorrow @steeplejackbeer opens their second location, this time in the former IBU Public House in SW Portland, called Steeplejack Pizza & Beer!
Tis the Season for Maibock! And the traditional Frühlingsfest (or Springfest auf Deutsch) which is Munich's lesser-known spring celebration.
With the price of everything going up these days, quite a few folks have been gnashing their teeth over the cost of beers, as they've increased to anywhere from $7 to $10 a pint...
My last visit to @hairofthedogbrewing?
This weekend @function_pdx is kicking off another pop-up: a month featuring the brands of @block15distribution, including @block15brewing, @forelandbeer, @degardebrewing, and @bespokencoffeeroasters.
Sometimes a cold beer and a fresh sunbeam is our only refuge amid a volitile reality over the past few years. And voting, there's always voting...
Despite a little liquid sunshine, the third season of @topwirehp at @crosbyhops is off to a busy start!
On April 19th, Sam Zermeño - Head R & D Brewer at @greatnotionalberta and owner of the newly incorporated @brujos_brewing, officially entered a partnership with @greatnotion, enabling him to brew and distribute Brujos beers to a wider audience.
Craft Beer Scribe Modern Times Belmont Fermentorium Now Open
Loading Comments...
%d bloggers like this: