Oh… the lazy days of summer. In the depths of a cold, wet winter in the Pacific Northwest, it sounds like a dream. In Oregon, the summer is generally packed with beer festivals (including one of the oldest in the country, the Oregon Brewers Festival), sun soaked events, and are the most profitable months for breweries.

Since 2005, the month of July has been denoted Oregon Craft Beer Month, made official two years later by governor Ted Kulongoski. It made sense as means to highlight the Oregon Brewers Festival, as well as other events, amid the warmest days of the year and a peak stretch for tourism.

That’s all changed for 2020 and it’s definitely for the better.

Anyone involved in the beer industry knows the lull of January, one of a few months during the year where sales are traditionally down. February isn’t much better, though quite a few events have filled the void to rally beer fans as the days grow longer. A time where holiday and resolution weary souls once again leave their homes in search of good times.

All this has been spurred by a new approach from the Oregon Brewers Guild’s new executive directors, Tony Roberts and Christina LaRue. With so many events already anchored in July and little to coalesce around during an already busy month, it was tough to add Oregon Craft Beer sponsored events. Instead, they’ve transplanted this Oregon beer-centric month to one of the slower times of the year, which is already filled with great regional events the guild can only bolster with new gatherings.

Historically, the crown jewel of February has been Zwickelmania, originally a state-wide open house over 5 hours featuring free samples (ideally from a zwickel off fermentation or brite tanks), brewery tours, and special events. Over the past few years, the event has been split into two weekends, one focused on Portland and the second weekend for the entire state – this year landing on Feburary 15th and February 22nd, respectively.

Be sure to check out Oregon Craft Beer’s site to find a list of participating breweries for each day, in every region, and the events/promotions at each location. Brewvana is once again providing shuttles on the 15th in Portland and comprised of two routes – one that begins and ends at Gigantic Brewing that loops the entire city in a clockwise fashion, and the other starting and ending at Breakside Milwaukie, looping through Clackamas and Oregon City. The route details are listed at the end of the article, but I’ll update this story once shuttle times and a map and/or dedicated link is available to share. 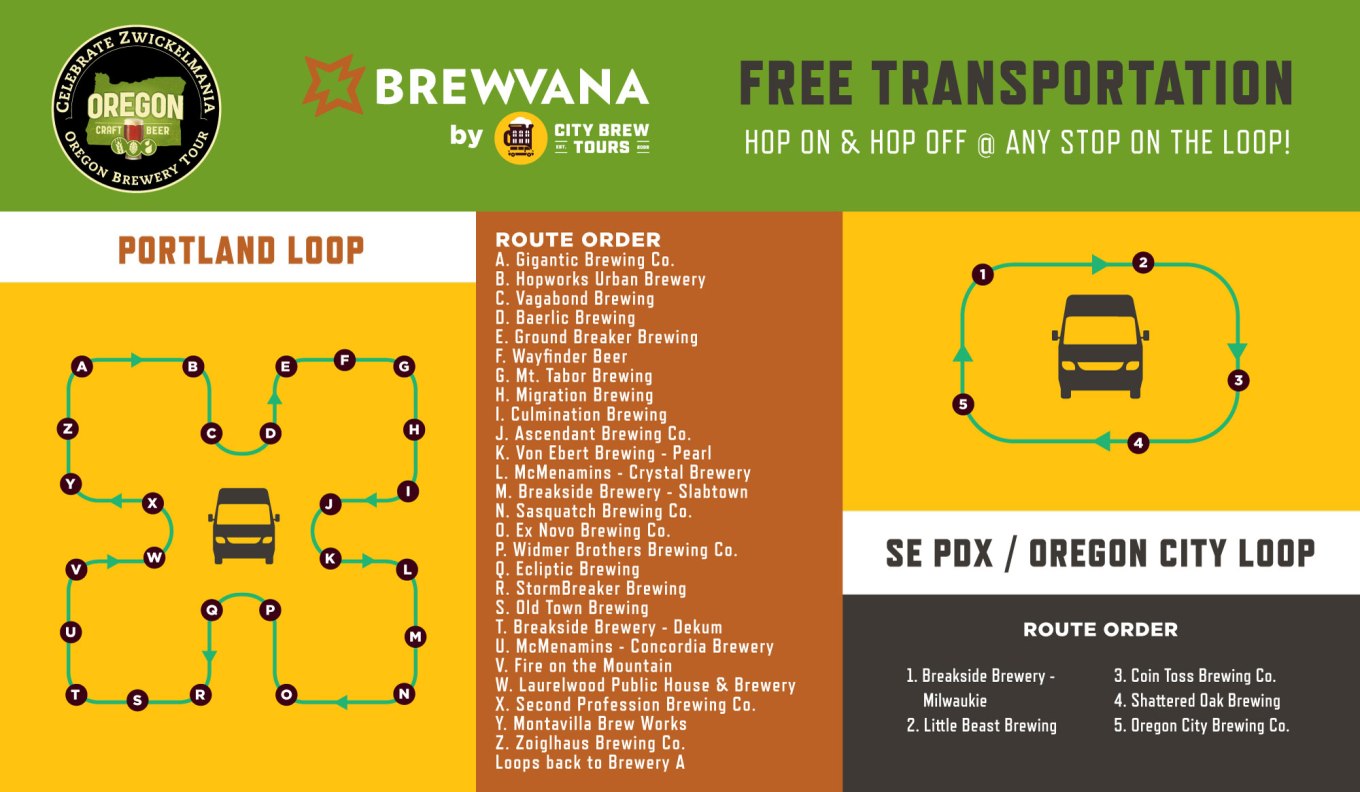 One of the newly added events for 2020 is the Oregon Beer Showcase, which kicks off today and runs through February 9th at Function PDX (NW 23rd + Lovejoy). The taplist will feature six breweries on draft at a time, each representing a different region of the state. January 31st through February 5th will feature Block 15, Boneyard, Common Block, Pelican, Solera, and Yachats. The remaining days through the 9th will feature Allegory, Bend Brewing, Coldfire, Ferment, Klamath Basin, and Ordnance. Throughout the entire showcase, cans and bottles from Ale Apothecary, Alesong, Buoy, Double Mountain, Heater Allen, pFriem, Sunriver Brewing and Wild Ride will be available to-go. Stay tuned to the latest updates, including what’s on draft at Function via their instagram posts and stories. 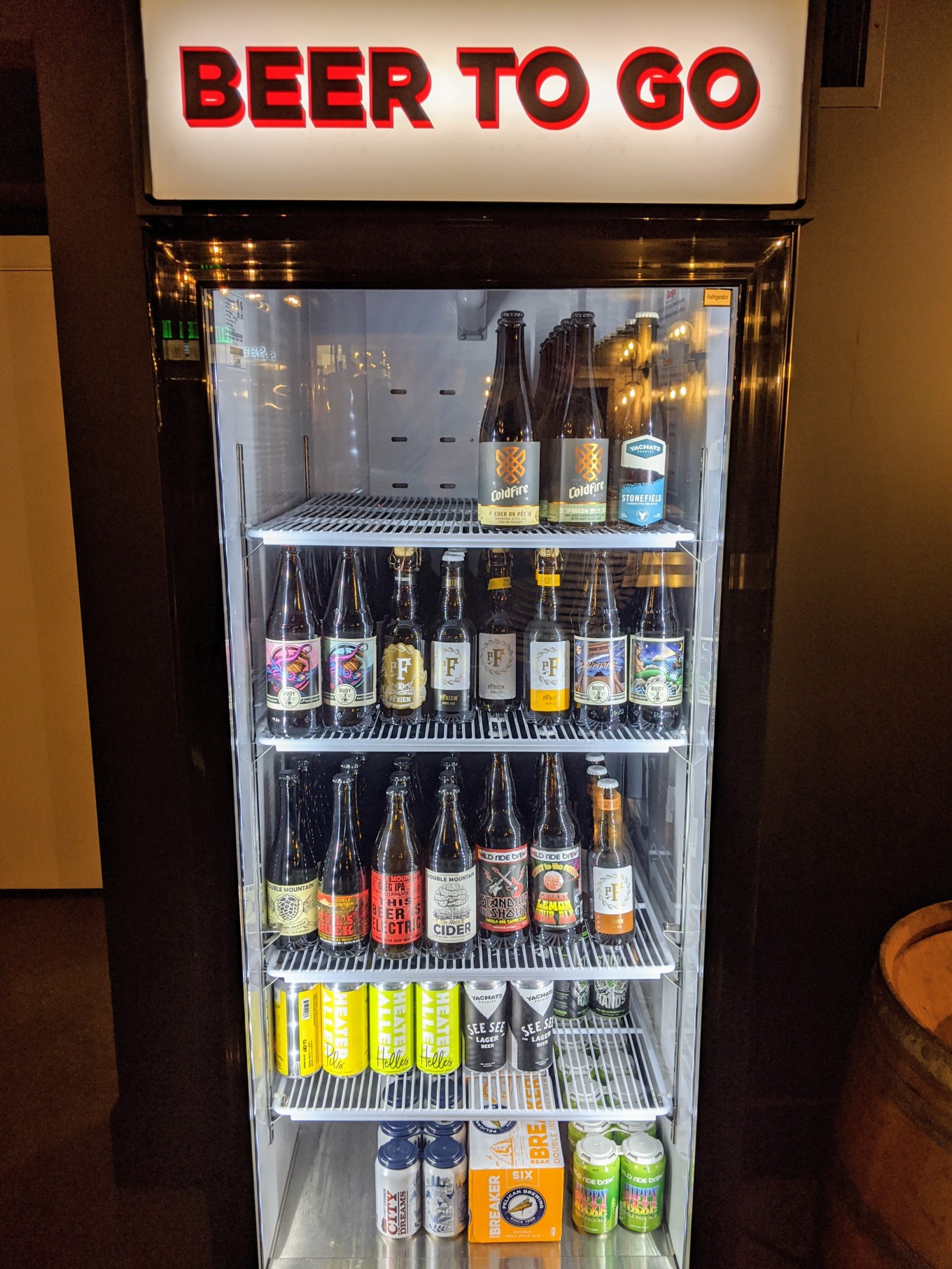 And for the second year in a row, breweries from across the state have collaborated on a limited run Zwickelmania beer that will be canned and sold at participating breweries during the event. “State of Excitement IPA” is a West Coast IPA collectively created by 30 Oregon brewers to celebrate the friendly and collaborative nature of the Oregon beer scene. State of Excitement IPA will be available for purchase at select breweries during Zwickelmania. Proceeds from sales of the beer benefit the Oregon Brewers Guild, which supports breweries, suppliers, education and collaboration.

And there’s so much more happening. Who can forget Fort George’s Dark Arts Festival? Tickets for that have been long sold out, although Brewvana has a round-trip shuttle heading there if you’re without tickets or lodging. There’s also a number of brewery anniversaries (Stormbreaker’s 6th, Migration’s 10th, and Threshold’s 1st), beer dinners (Heater Allen), and five featured brewery tastings at Uptown Beer. All these happenings are listed on Oregon Craft Beer’s events page.

Below is a list of all the major events happening throughout the month, as well as the route list for Zwicklemania shuttles. If you have any questions or need more information, check out the oregoncraftbeer.org, visit Function PDX during the Beer Showcase, or shoot me a message via social media. And I look forward to running into you and sharing a pint! 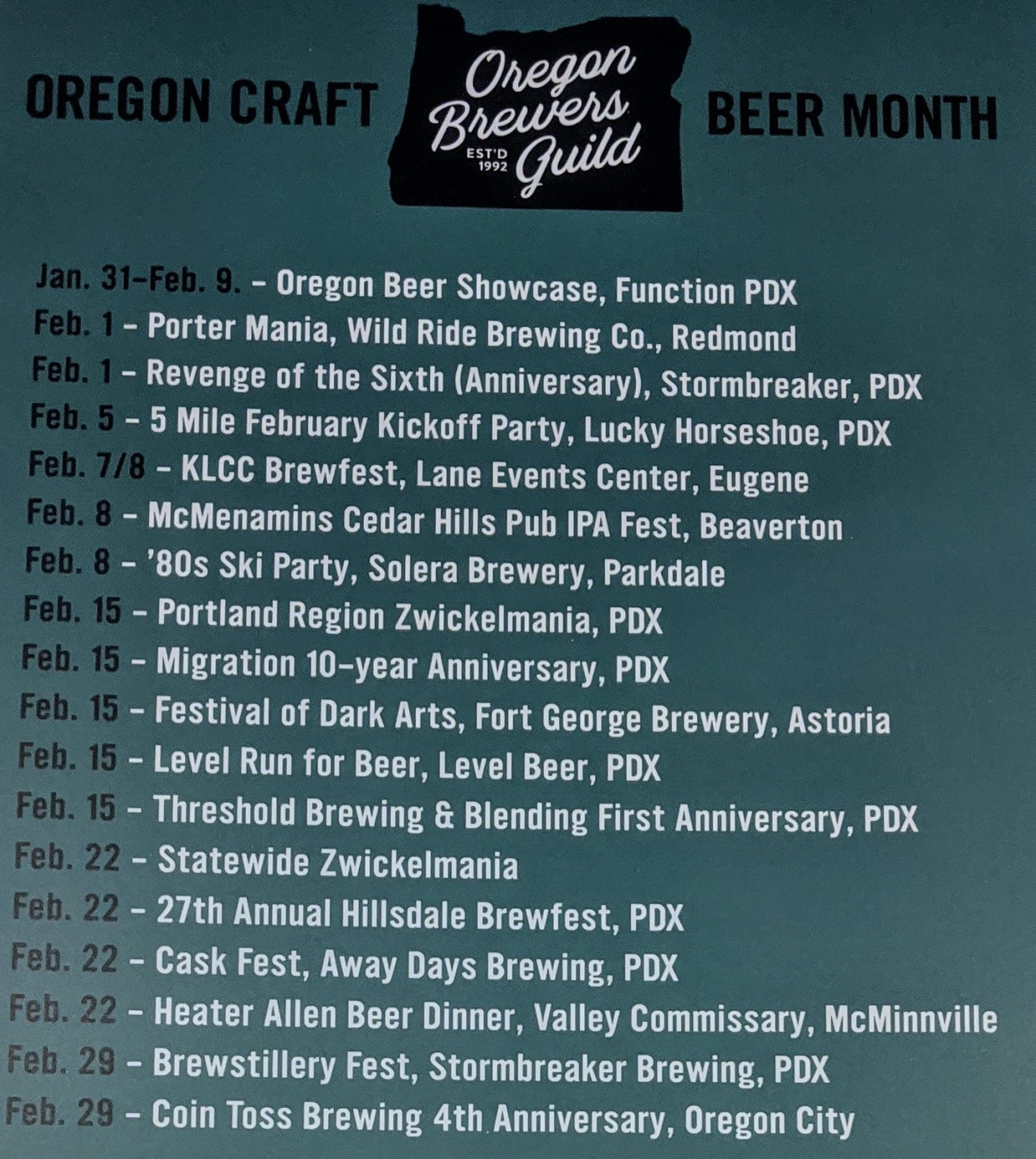 A taste of last night's palate adventures:
When the light's just right on a beautiful day at @rusebrewing...
As @bridgetownbeer prepares to celebrate their 14th Anniversary tomorrow, @drinkviabeer kicked off the celebration last night with a tap takeover, including their new collab with Bridgetown, Godzuki Rice Lager.
Over the weekend I paid a visit to The House of Lords... well, I sat down for a chat at the home of Giselle & Gavin Lord of @hettyalicebeer, and met their infant son Gibran as well!
A spectacular 4th Anniversary celebration was had yesterday at @wildwoodtap in Hillsboro, including a special visit from the owners of @burnsalesdenver and featuring some savory delectations:
A great night at @arraybottleshop celebrating @a.message.from.our.sponsor's birthday 🍻
The following retrospective was inspired by posts from @lowestculture & @mymoneygoestobeer in December.
Spent last night celebrating the release of a new IPA from @vicebeer & @la_mere_brewing called Suitcase Full of Cash.
When one of your favorite local breweries does a tap-takeover at one of this town's most under-the-radar bottle shop/taprooms, you have to go!
Five Years On
Craft Beer Scribe February is the New Oregon Craft Beer Month and It’s A Good Thing
Loading Comments...
%d bloggers like this: