As the rise in popularity of fresh hop beers and the festivals that feature them have exploded over the past decade in the Pacific Northwest, it only seems apt to devote a series to this phenomenon as the 2019 Hop Harvest begins to unfold.

Between now and sometime in October, I’ll be featuring a number of stories detailing the science behind the cultivation of hops, the harvest itself, as well as featuring some of the delicious fresh hop beers being made in the region following harvest.

Last year I spent more time than ever talking to hop growers, brewers, and the general public about what has become an annual celebration – for some it comes closer to Christmas than the holiday season itself. So if you’re not aware of the fanaticism over hop harvest season, have no fear, I’m happy to explain…

To start, we’ll examine a “first-of-it’s-kind” study, just released last week, that was undertaken by Coleman Agriculture (the largest hop grower in Oregon) and Oregon State University over the past year. Their goal? Correlate the terroir (ter-whar) in which hops are grown with the attributes they possess when harvested, or more simply, “does terroir affect hops?”

This hypothesis was investigated by a 5 person team from Coleman Agriculture, 3 Oregon State scientists (including Dr. Thomas Shellhammer), and Andy Gallagher, a soil scientist from Red Hills Soils. Most intriguing to me are the apparent lack of historical studies in this field. I mean, how often do we hear terroir mentioned in regard to beer, other than in the realm of farmhouse/spontaneous production? It’s rare, and quite honestly, terroir has almost always been associated with how it impacts grapes on the vine, not hops on the bine.

To have OSU’s Department of Food Science & Technology work with Coleman Agriculture only makes sense, considering OSU’s history as a leader in hop science. And with Coleman’s broad system of hop farms (including sites located in Mount Angel, St. Paul, and Independence Oregon), it’s a natural partnership. The tricky part is that over 150 different variables were identified as possibly having an impact on hop growth, all found within the broader categories of climate, soil, terrain, and cultural practices.

When it came to soil alone, which appeared to be a primary focus in this initial study, over 50 variables were identified, in addition to management of nutrient levels, historic climate data, weather over the course of the year, and more. Other variables, such as insect damage and other environmental factors weren’t evaluated this time around, but should very well be during future research.

Most intriguing of their findings and the reason this “initial snapshot” was deemed a success, were the results found during a focus specifically on Centennial and Sterling hop growth, as they pertain to the different soils they were grown in.

The Centennial hops, in particular, exhibited different traits depending upon growth in predominantly Stratified Alluvium Soils (younger river sediment/topsoil) or upon Missoula Flood Silts (older glacial deposits that came downstream from Glacial Lake Missoula, dating back to the ice age). These extensive studies of the ground soil have not only resulted in a soil map for the hop farmers, but also a rough outline of how the composition of these differing soils can impact the alpha acids, yield, resulting flavors, bitterness, and more.

While out in the hop fields, we were given a chance to see the various layers of differing soils at the Independence location where we’d gathered, getting a first-hand view of what this study entailed.

Further, they provided us a sample of two different Centennial single hopped IPAs, one made from hops grown on plot 008 and the other on 307. While these initial findings, seen below, truly show differences in Alpha Acids, IBU, ABV, SRM, and Final Gravity, we were also informed that the numbers for 008 were a result of three tests to provide an average, while the 307 batch was only tested once. So there’s that… 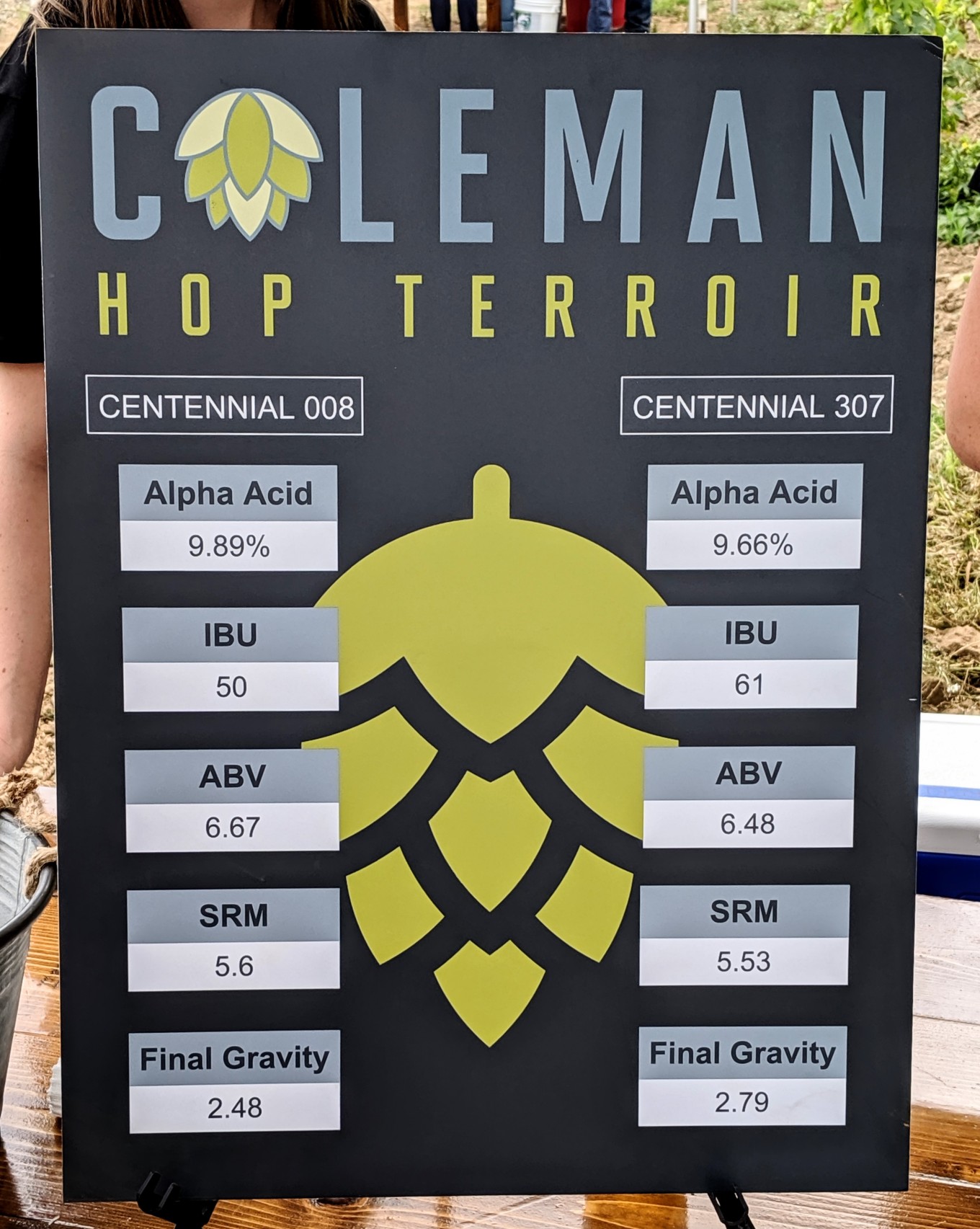 Between the fields they setup various booths detailing the environment, soil composition, and cultural impacts each area portrays, in addition to samples and the resulting beers from a few of their prominent hop varietals, of the 24 Coleman harvests each year.

To finish up the day, we sampled various beers with specifically prominent hops grown by Coleman… because of course we’re in the middle of a hop field and it’s 85 degrees – it’s what you do! They included a vast array of Strata hopped beers, plus Mosaic and Citra, in addition to the aforementioned Centennial study.

In all, the experience was an intriguing look behind the curtain of how Oregon farmers and scientists are leading the way in not only Salmon Safe and environmental practices (such as Coleman alone saving a million gallons of water last year by utilizing drip irrigation), but also better understanding the factors that impact the foods we eat and drink.

I’m excited by the initial results we were provided regarding this new approach to hop cultivation, but even more excited by the possibilities and positive impact this will have, for generations to come, upon the cultivation of hops and the beers we enjoy.

Stay tuned for more Hop Harvest stories over the next few months!

More about OSU’s Department of Food Science and Technology

Coleman Agriculture is a 6th generation family owned and operated farm with headquarters just south of the small Western Oregon community of St. Paul.
We manage over 8,000 acres of land in the Willamette Valley cultivating some of the highest quality crops you’ll find anywhere. We specialize in hops, hazelnuts, seed crops and a variety of vegetables, selling directly to brokers and commercial partners.

When it comes to hops, we’re the brewer’s best friend. We are one of the most diverse hop growers in Oregon, producing over 2 million pounds, from 24 distinct varieties, every year. 95% of US-grown hazelnuts come from Oregon and we account for a large chunk of our country’s total production. Since we first planted hazelnut trees in 1969, our family has harvested over 20 million pounds of nuts. Rounding out our primary plantings are seed crops and vegetables. We vary the acreage and the types of vegetables planted each year to increase the biodiversity and overall health of the soil.

For the Coleman Family, farming has always been more than a livelihood–it’s a way of life.
It’s a way of cultivating family and community and providing for the future, as well as the present. That’s why we use sustainable farming practices and partner with conservation-minded folks like Salmon Safe, Oregon State University, the Oregon Brewshed Alliance, and the National Resource Conservation Service. We believe that by combining hundreds of years of traditional farming know-how with modern sustainable methods, we can utilize the land in a way that best serves us all.