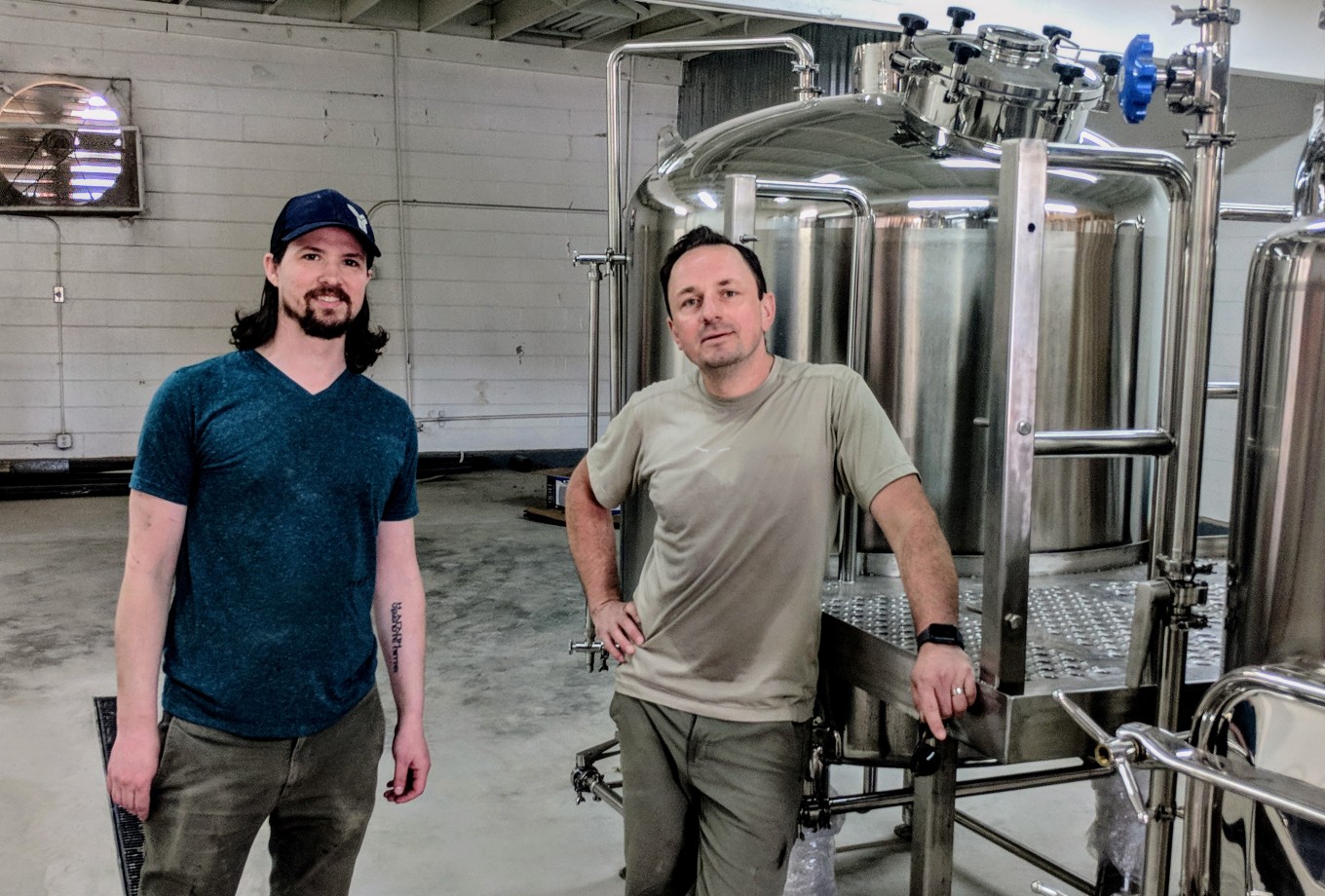 For some brewers, the passion for their craft never leaves the realm of home brewing. It’s a difficult transition – leaving a full-time job, seeking out capital, balancing family and work, dealing with the bureaucratic red-tape, and devoting every waking moment to pursuing a dream that may not have once seemed possible.

It’s a story quite similar to how Threshold Brewing and Blending opened up shop in Portland’s Montavilla neighborhood.

Co-Owners and Brewers Jarek Syzmanski and David Fuller have spent the past 2 years planning, fundraising, and building the brewery they knew could be a reality. Opening their doors a few weeks back and soon celebrating their Grand Opening on Zwicklemania Saturday (February 16th), Threshold has become a new destination to seek out on Portland’s east side.

I became aware of Threshold’s brews over a year ago when a growler of an Imperial Stout they’d made showed up at our Wednesday bottle share. It was quite impressive. Then it happened again last March, this time a Double IPA appeared and word that they had a brewery in planning. But it was more complicated than that.

I was intrigued by their story and wanted to follow their progression throughout the process of opening a new brewery. The following is an interview I conducted with Jarek and David at the end of the Summer, plus pictures taken over the past 8 months – in the midst of construction, their first brew, and the opening. 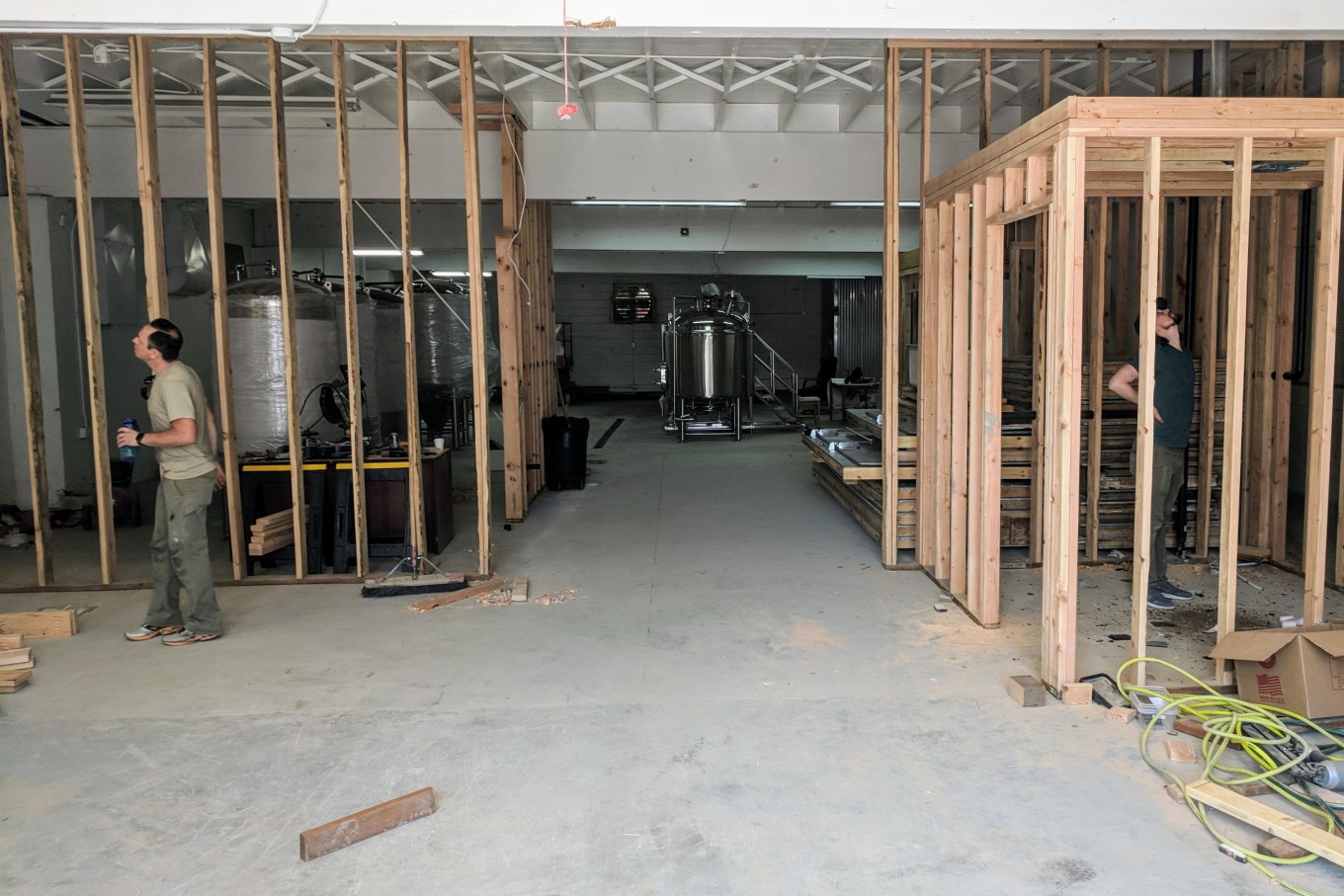 You both started homebrewing around 8 years ago, back in 2010. When you started planning to build Threshold, what was the deciding factor to do it?

Jarek: About two years ago, I took the summer off from my day job. I was doing some traveling and was away from my desk. The dream of opening a craft brewery was in my mind for quite some time at that point. That extra time allowed me to think and imagine and basically re-envision my life. It was still an idea to open a brewery, but I started working out the numbers and taking small steps forward. I’d been brewing for a while by then and had perfected a lot of my techniques and recipes.

David: Jarek approached me in the summer of 2016. He had run some numbers and we had been talking about it for a while at that point. It seemed like it was just time to take it to the next level. At the same time, we really wanted to stay in our neighborhood and provide a place our families and friends could come and hang out. 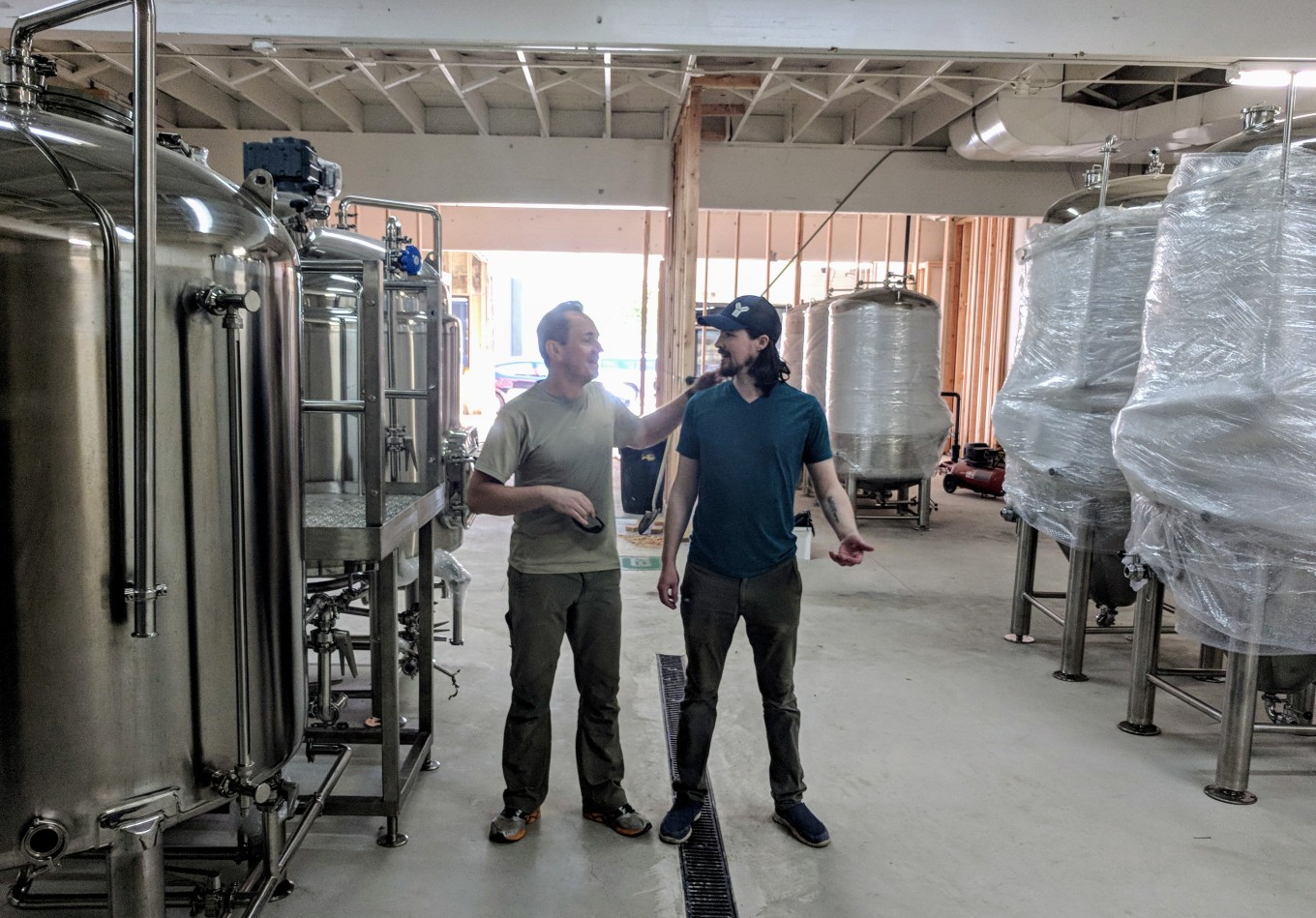 You created Indiegogo and GoFundMe campaigns to raise capital for opening the brewery. How successful have those been and what incentives were created to encourage people to contribute?

Jarek: The [Indiegogo] campaign was a good learning experience and a good way to get some press. We both don’t have any trace in the brewing industry! Looking back, it probably would have made more sense to start with a campaign that didn’t have a minimum cap. We didn’t end up reaching our goal, which meant all of our supporters didn’t receive their incentives… they simply got their money back. Anyone who’s opened a business, and maybe especially a brewery, knows how tough it is up front. By the time we open, we’ll have been leasing our space for over a year, paying some steep rent out of pocket since bank loans don’t cover that kind of thing.

David: We did end up moving to a GoFundMe page to restart our campaign that has brought in some solid support – and it offers the incentive of a bottle club membership. So for folks who would want to go for that anyway, it’s a great way to get their financial support up front, which hugely helps with our start-up costs.

Tell me about the brewhouse (capacity, equipment, barrels, etc) and what its capabilities are.

David: We are running a 10BBL brewhouse with a 20BBL HLT. It’s electric, which lets us automate much of the process, which is nice. 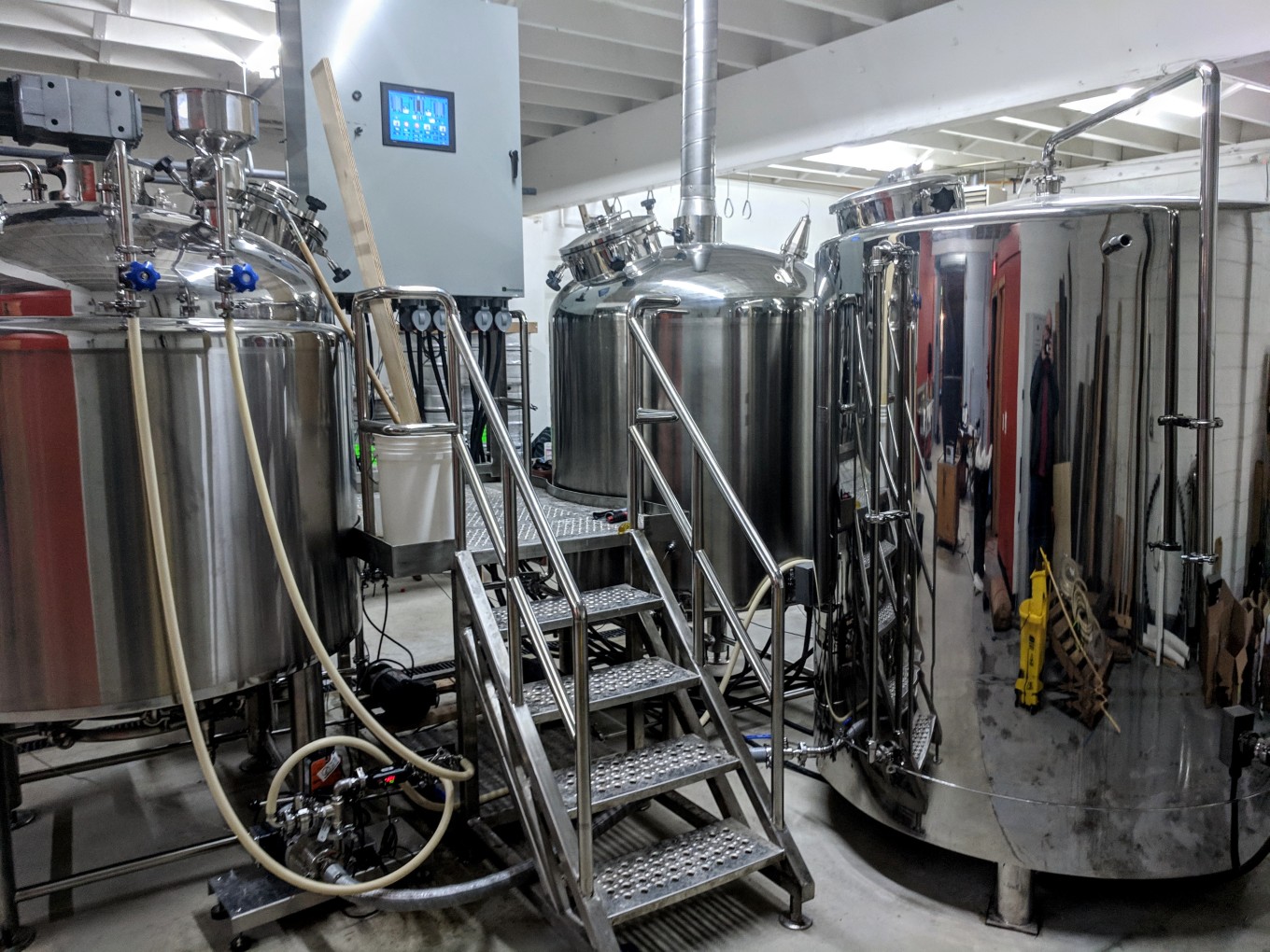 It’s a rare thing for a Portland brewery to open their doors within a year of building out the brewery. How have you been able to do it?

David: We have been in the space since July 2017, so we’re past a year at this point. We have been fortunate enough to have friends with contacts who have done this before, and we did a lot of research. We got all of our license applications in early and thus finished them early. Our construction team was awesome in giving advice about working with the city and what things would be required.

Are you planning to focus predominantly on IPAs and NE IPAs or are there other styles you plan to include, on the non-barrel-aged side of things?

Jarek: Heavily-hopped ales like IPAs are something we both love and look forward to always offering. But a few other styles that we’ve been brewing and perfecting for a while are Stouts, Saisons and other Farmhouse beers, and Strong Belgian styles.

David: Our fresh Saisons are a mixed culture, but it’s completely fermented in less time than most because of the yeast blend. They’re bright and Brett forward and often dry-hopped to bring out the citrusy Brett esters even more. Jarek makes a wide variety of stouts and porters, some of which are consumed fairly young. We like to experiment with seasonality too, like a spiced Belgian Golden Strong for fall. 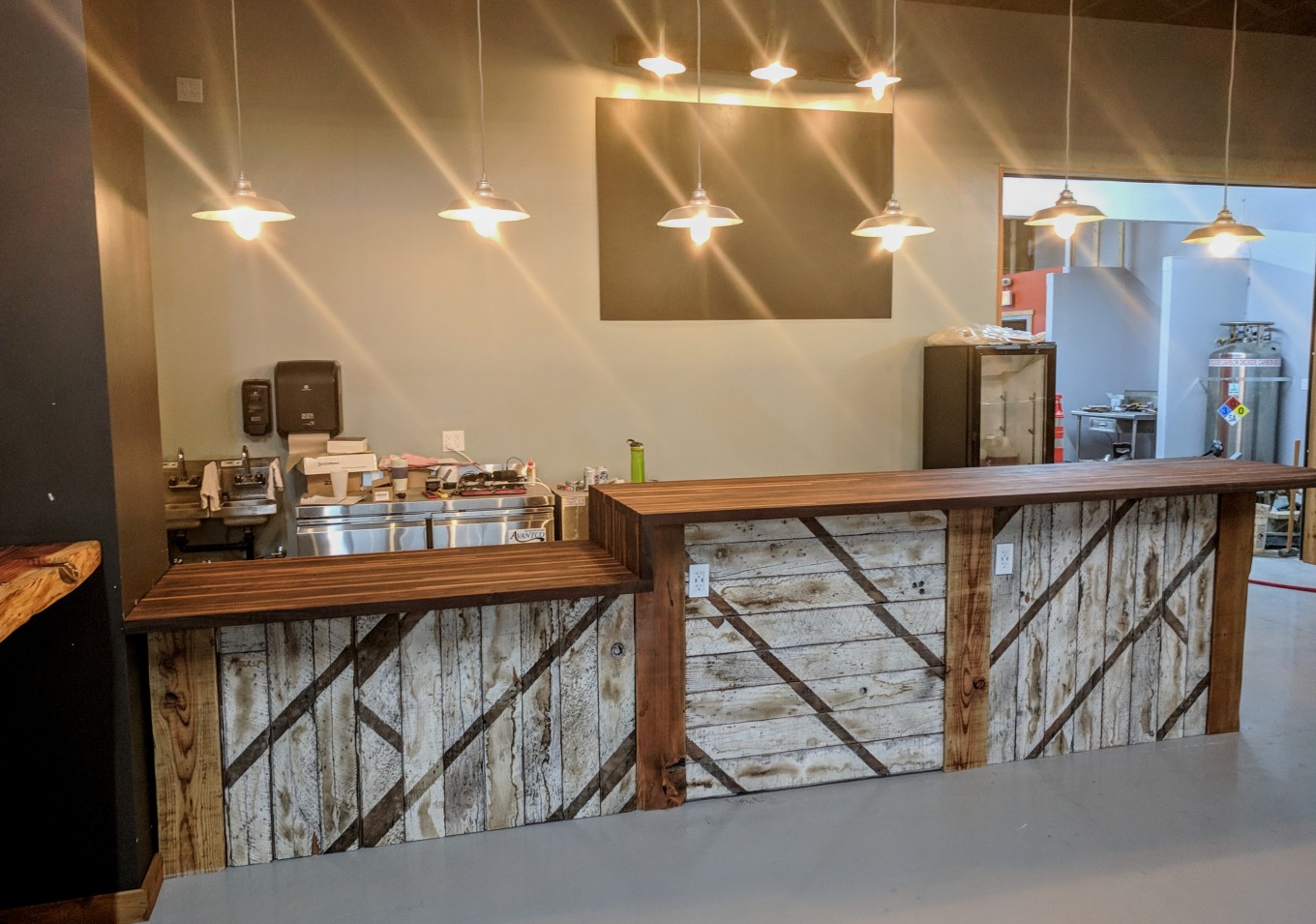 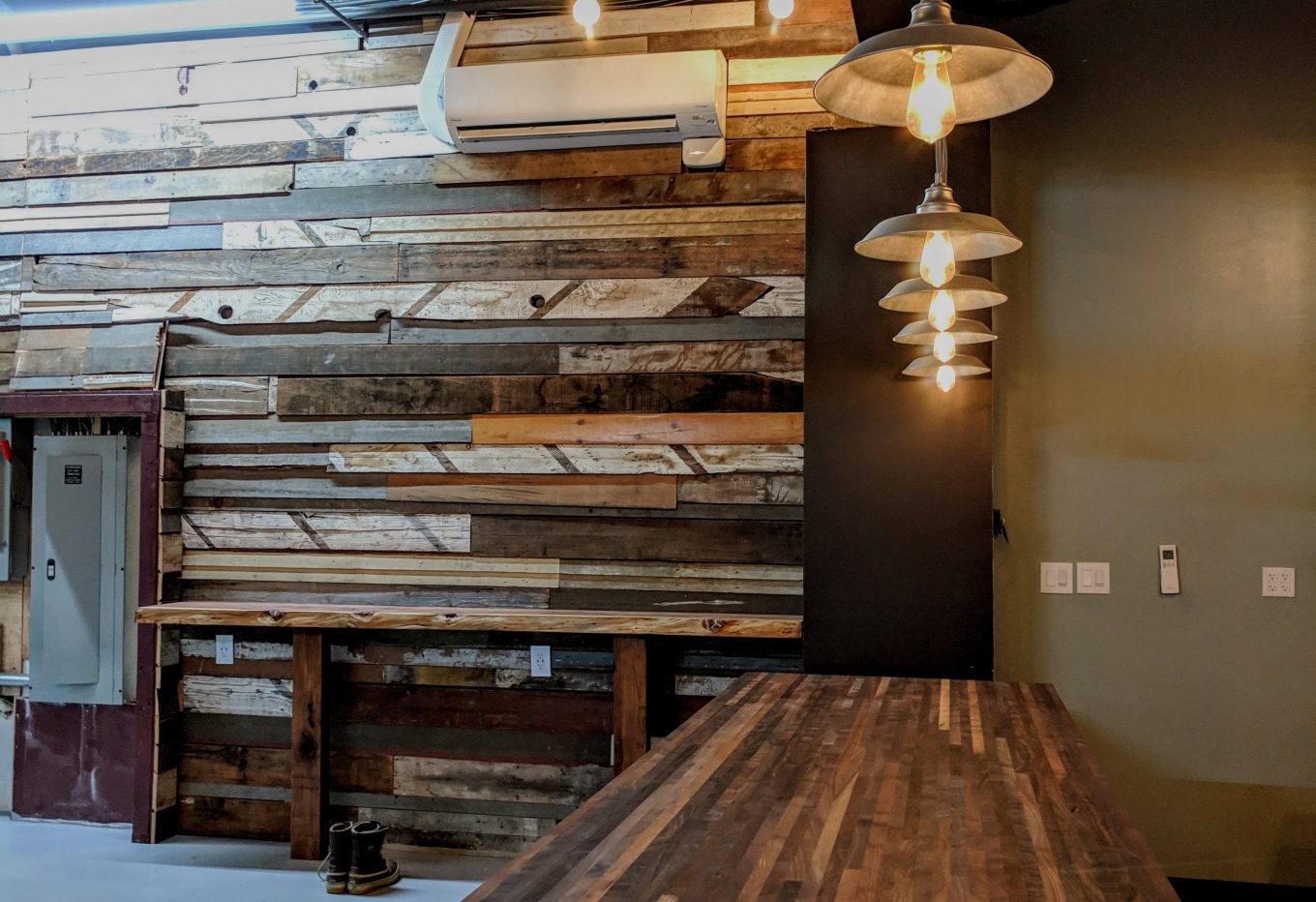 As far as barrel-aging & blending go, which styles are you planning to focus on?

Jarek: From Bourbon Barrel-aged Stouts to mixed fermentation beers of all stripes to Brett Saison to various other experiments. We want to bring in as many barrels as we can fit and manage because much of the magic comes in the blending of different barrels and even different beers. We’ve been barrel aging and cultivating beers in our basements for years now and that’s the kind of stuff that we get super excited about sharing. 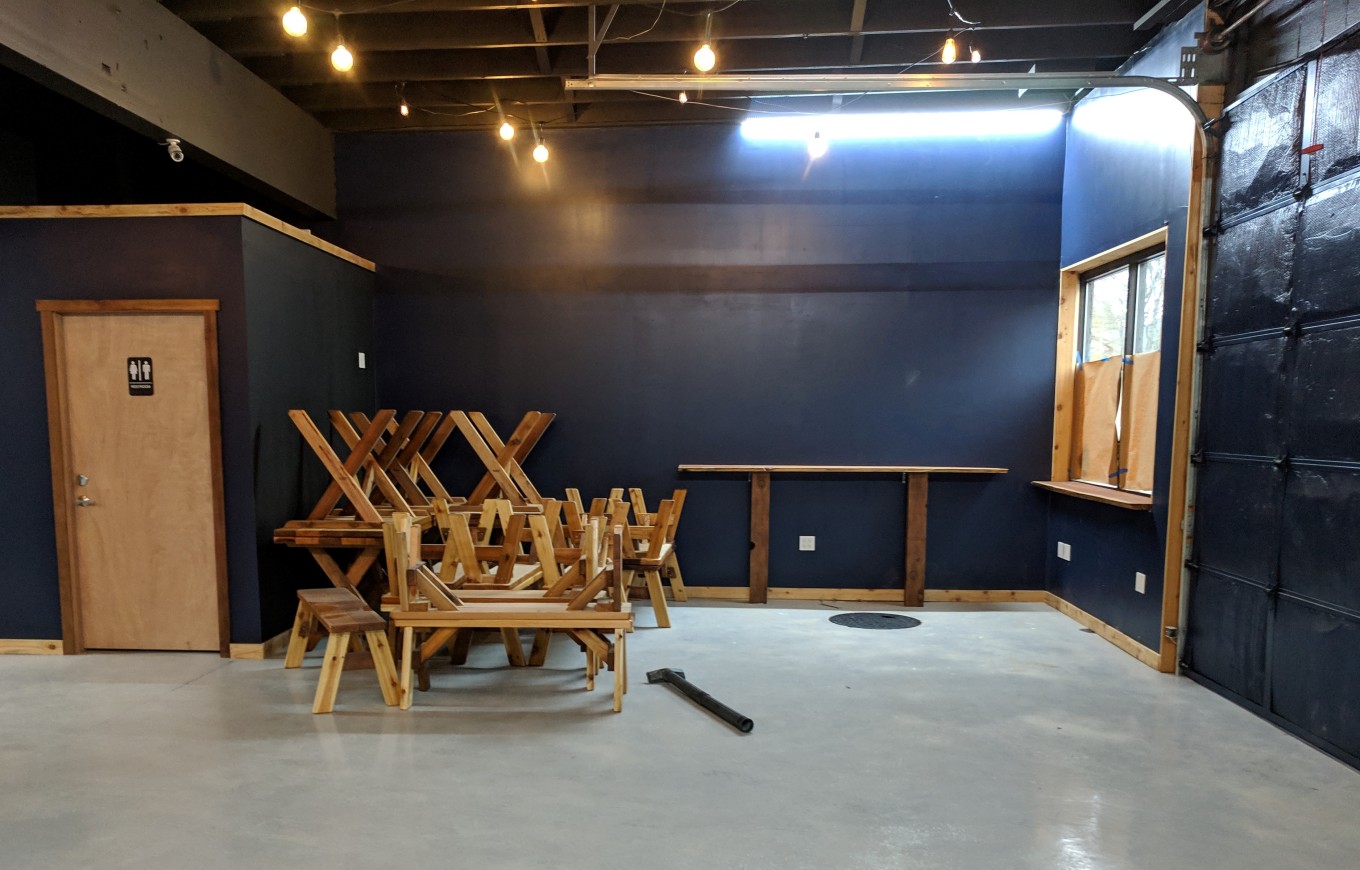 What challenges have you come up against building out the brewery yourself vs. purchasing a turnkey operation or contracting?

David: The biggest challenge has been the amount of our time required for us to get it done. We both work full time, have families. I’ve got three young kids, and being at the brewery nearly every weekday evening, all day on the weekends for the past 3-4 months has been taxing and required their support and my wife has been really good about it. We’re glad we hired the contractors we did (trades, architects), as they really helped us understand and manage the process.

Jarek: Project coordination and dealing with large numbers of institutions that do not talk to each other but are often required to approve or resolve a single matter has also been a challenge. Thankfully we both have family, friends, and neighbors who have been very supporting us during this journey.

Sounds like the taproom will be a clear focus, but what plans do you have for packaging? Cans, bottles, crowlers, etc?

Jarek: We’ll have a crowler machine from the beginning, and plan on getting a 4-head bottle filler shortly after as well. Canning, we’ll do mobile canning for some releases and save up for the equipment. We have the floor space picked out.

Are there any special amenities or unique attributes that the Threshold location will feature?

David: We’ll be open to families and minors with a comfortable tap room. We’ll have some outside seating and open-air tasting room when the weather is good.

Jarek: I think something unique that we plan to cultivate really is a community feel. We plan to use the space for events, classes, you name it. My wife is a yoga instructor and cheesemaker. David produces music, so we could definitely do small concert events. 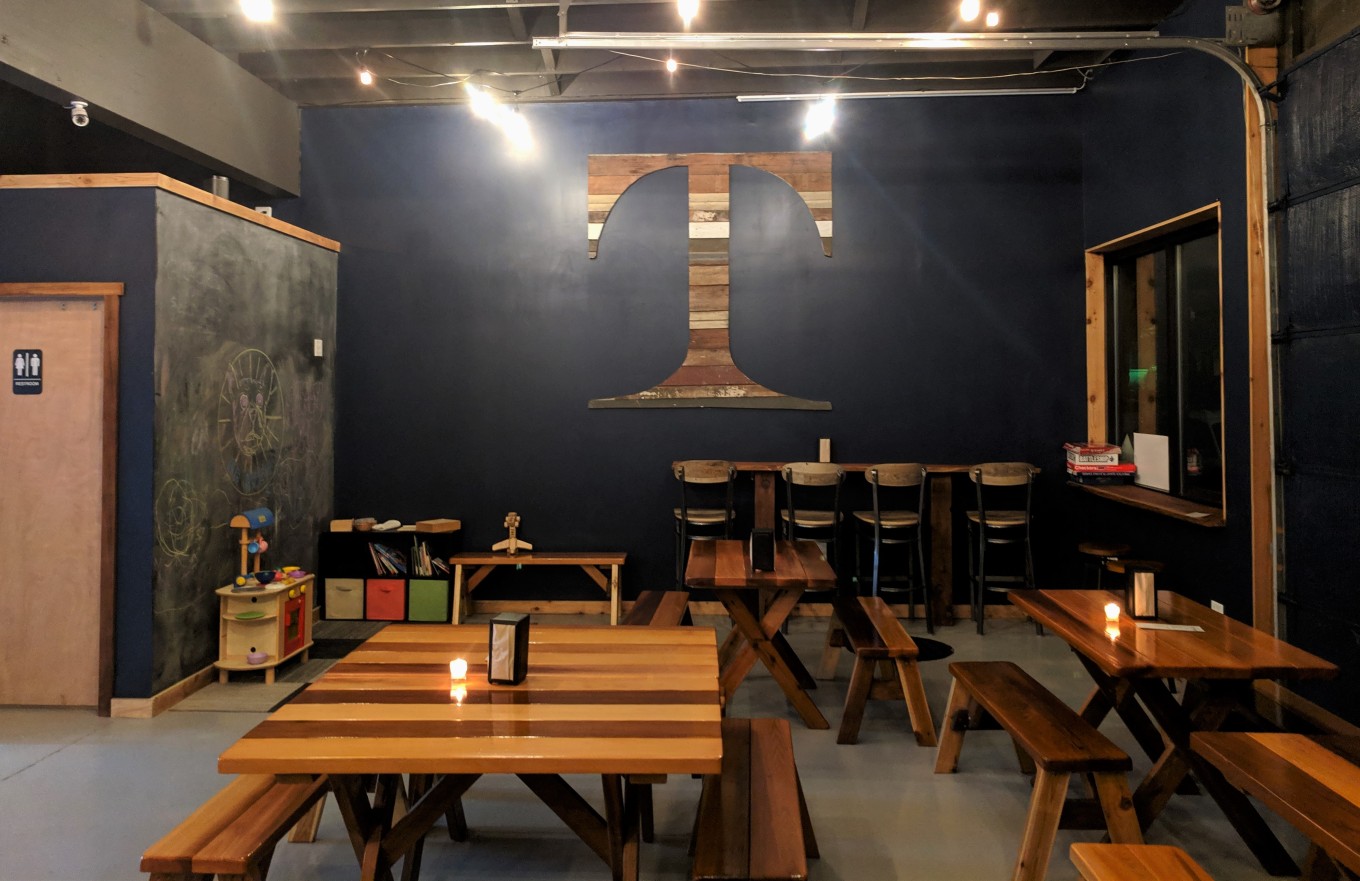 What food options will be available at the taproom?

David: Since we allow minors, we will have a short snack/small plate menu at the brewery. Our vision is to do easy, casual items in a more interesting way while utilizing local vendors as much as possible. We’ve got our eye on a couple of the vendors at the Montavilla Farmer’s Market that we want to partner with, as well as offering at least one vegan and gluten-free option.

Jarek: Folks can always bring their own food in as well. There are several new permanent food carts on Stark just a block away from us that are delicious plus several well-known restaurants on the strip.

What do you feel is going to set Threshold apart from the other 70+ breweries in the Portland area?

Jarek: I’ve lived in Portland since 2003 and watched the craft breweries emerge, the nano breweries, the commentary on whether we’ve reached the point of brewery saturation. I think what’s also emerged, though, is a larger Portland with more developed neighborhoods and the expectation of having one or more breweries nearby. We’re in Montavilla which is a very dynamic place in Portland with a large number of people seeking an inviting place to spend time at and enjoy a glass of good beer. We are just a short cab or Uber ride from PDX airport. Another great brewery, Montavilla Brew Works, is just around the corner. Our brewing styles are different and unique and I think that Threshold will be able to compliment a variety of options in the neighborhood to draw a wide range of customers who will want to spend a night out in our neighborhood.

David: We think our location and family friendly atmosphere will help us be successful in the long run. SE Stark doesn’t have a lot of options where you can bring your kids and have a beer and a snack. Mostly there are sit-down restaurants, which can be great, but sometimes too formal for smaller kids. We are starting hyper-local and we will branch out as we can, so at this point, we’re not even thinking about the big breweries out there.

Eight months and a few delays later, Threshold’s doors have now been open to the public since January 10th. You’ll currently find three of their own beers on tap, plus 9 guest taps that include fizzy wine, cider, kombucha, a beer from neighbor Montavilla Brew Works and more. They also have an experimental cold brew coffee stout, conditioned on Geisha coffee beans, in the works.

On Tuesday, they hosted local media and industry folks at the taproom to show us around. After we’d sampled the current offerings on draft, some of their wonderful barrel aged wild ales made an appearance (seen below), from what I can only presume to be a dense cellar of experiments done right.

If what they had on hand is any indication of what’s to come on the blending side, they’ll soon be wowing Portland with some stellar Belgian inspired blends and barrel-aged imperial delights. 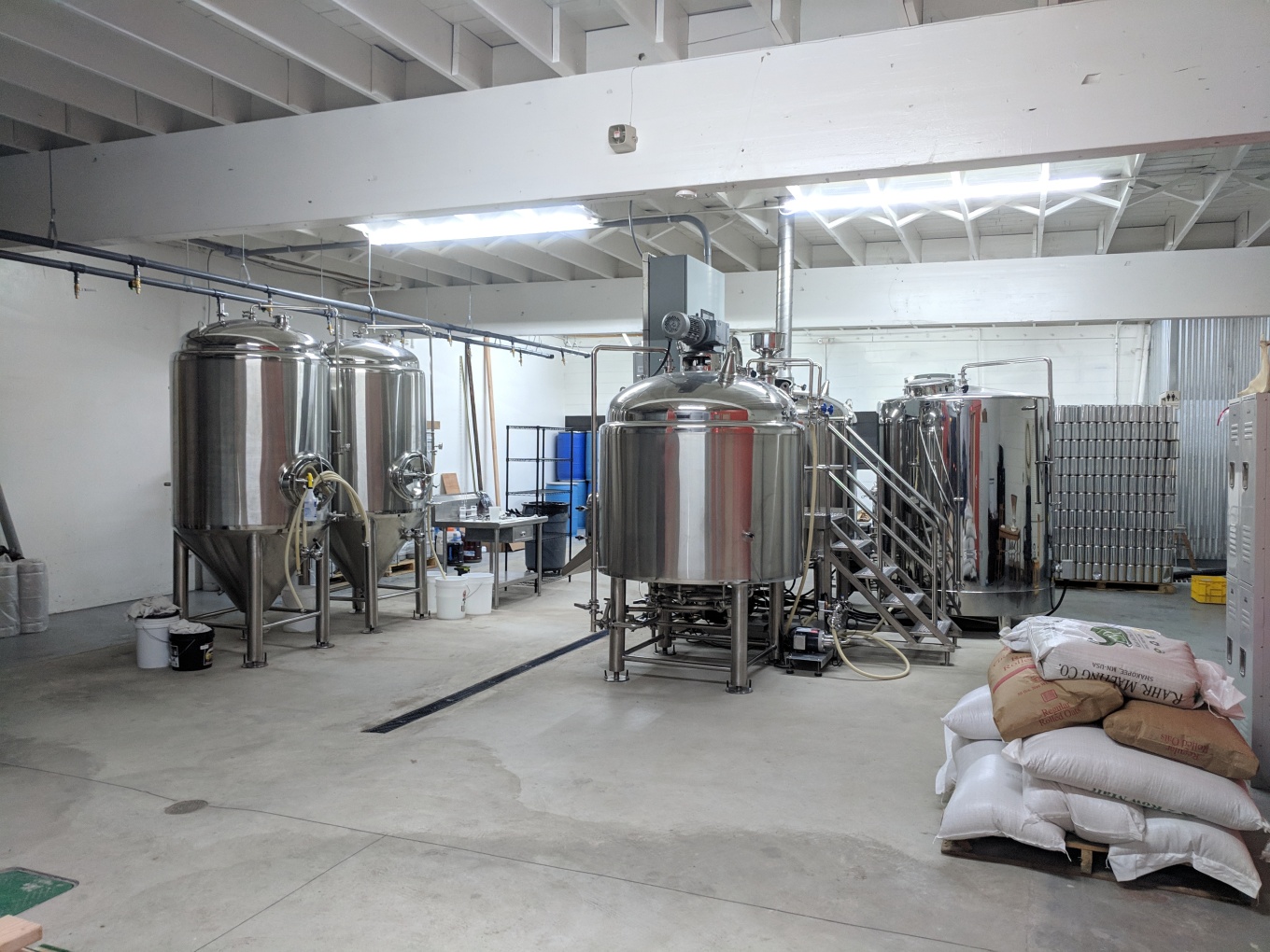 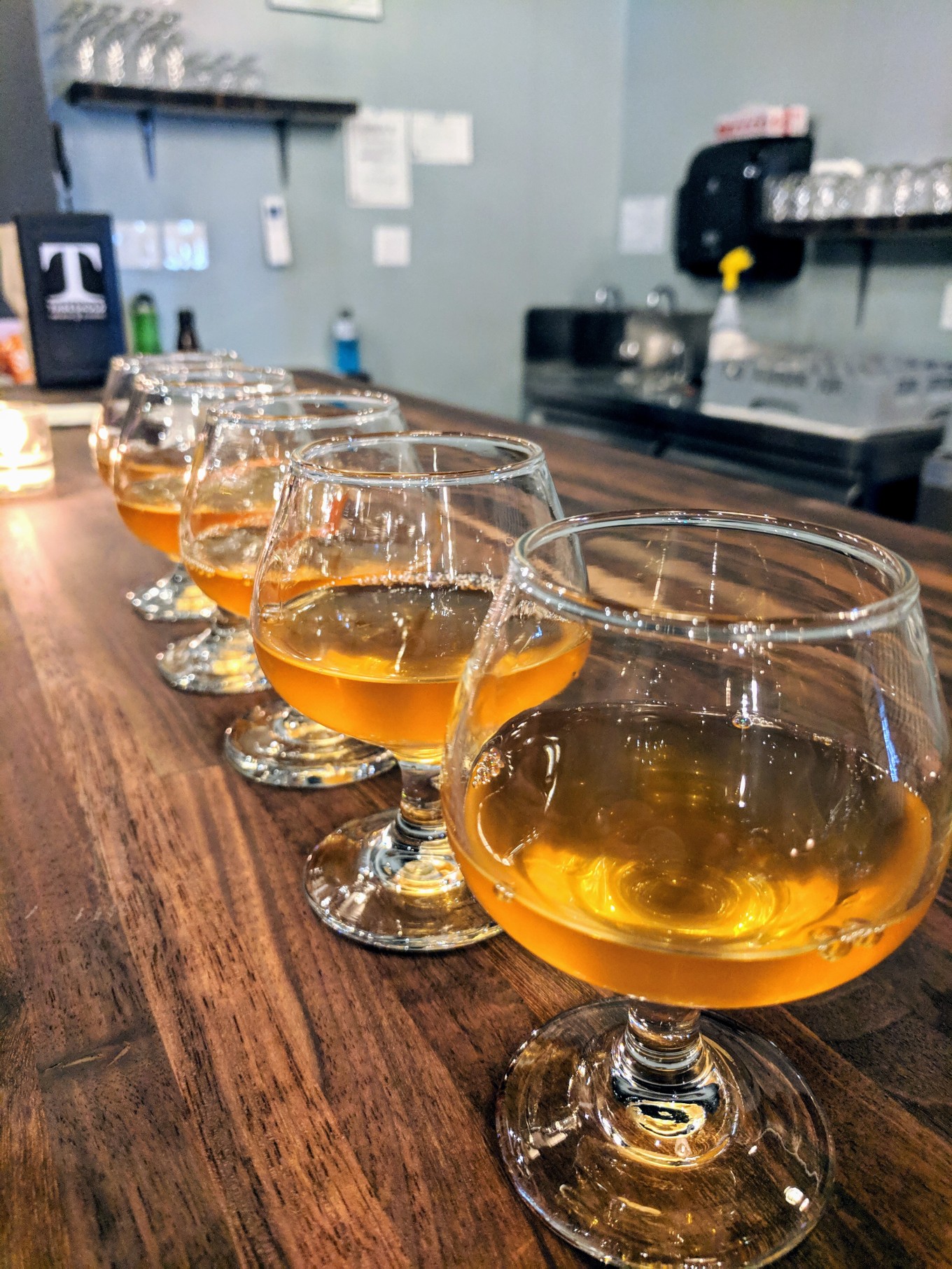 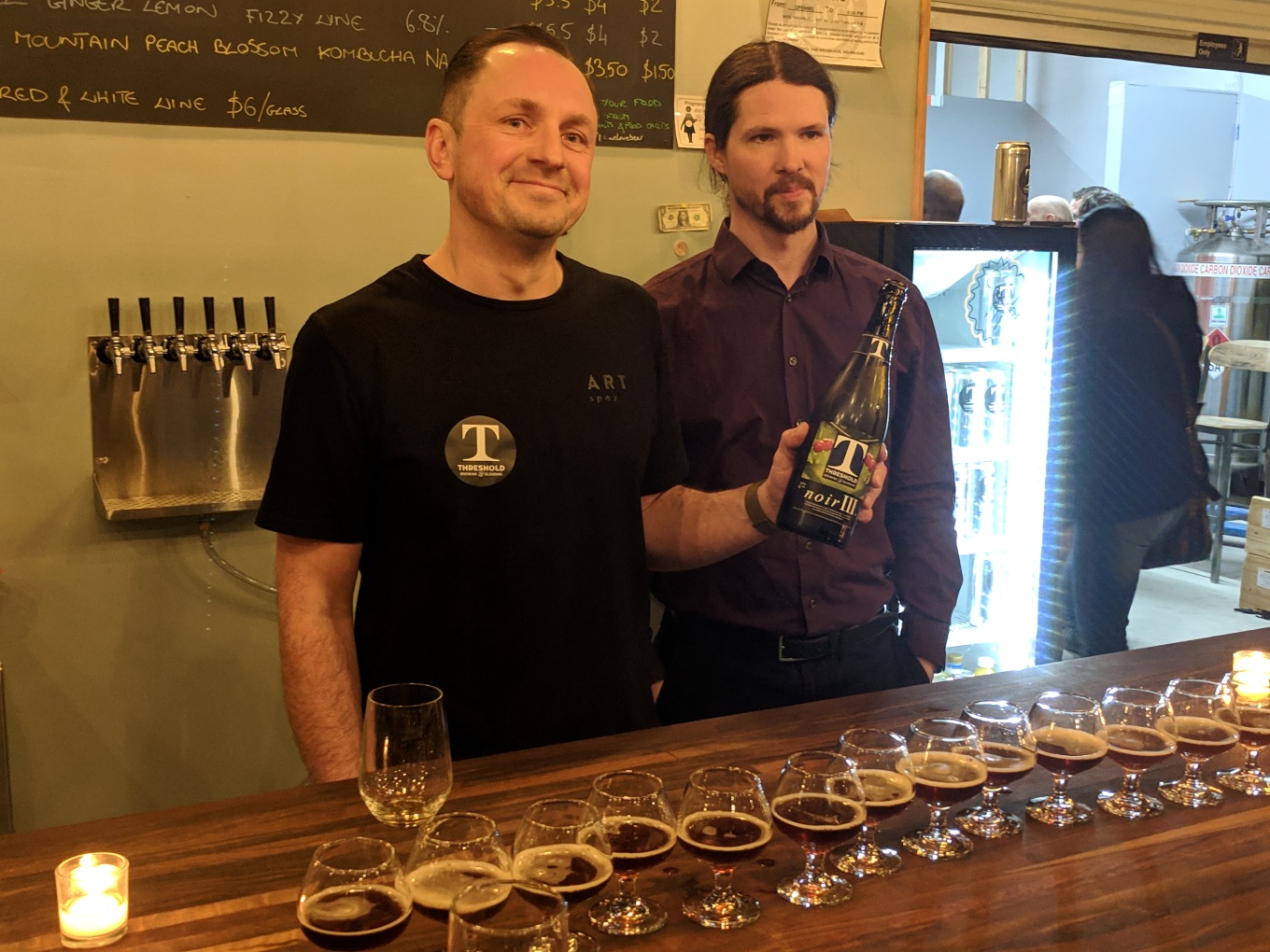